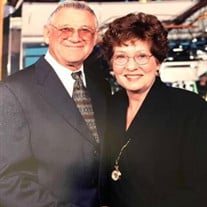 Barbara Lynn (Thomas) Emde, 86, passed away on Thursday, December 2, 2021 in Little Rock. Barbara, or “Barb” as she was affectionately called by many, was born February 20, 1935 in Tuckerman to the late Ottie Runsick Ford and Oscar Thomas. She grew up and lived most of her life in Bald Knob, Arkansas where she was a graduate of Bald Knob High School. Barbara married her high school sweet heart, Don Emde in January 1953; they were married 64 years and had one daughter, Kimberly (Emde) Sutton. Barbara and her husband owned and operated Forbes Lumber Company and Emde Apartments for the elderly for over 37 years. Barbara was not only actively involved in their business, but most importantly to her was her role as a devoted mother and homemaker. Barbara and Don enjoyed a life of hard work, traveling with Kim and friends and just simply being at home with their friends and their dogs. The door to their home was always open and garage door always up. Friends were regularly stopping by for a cup of coffee and almost always a homemade dessert or peanut brittle, especially at Christmas time. They were known for their fish fries and everyone loved her hushpuppies. Conversation was never lacking, stories of Don and Kim’s escapades of Bald Knob days gone by, you left the visit feeling good, filled with laughter and warmth of her presence; she was an amazing host. After Don’s passing in 2017, Barbara chose to relocate to Jacksonville to be closer to family. She was a strong, independent lady. She was fully engaged in the building of her new home from the ground up and seemed to love this new challenge. Barbara was preceded in death by her mother, Ottie Runsick Ford; step-father, Jake Ford; father, Oscar Thomas; her husband, Raymond Don Emde; daughter, Kimberly (Emde) Sutton and a sister, Betty Parsons. She is survived by her brother, Ted Thomas and wife Lynn of Jacksonville; niece, Jo (Parsons) Lavine and husband Larry of Texas; nephews, Ted Thomas, Jr. and wife Vicki of Conway and Todd Thomas and wife Dee of Jacksonville; son-in-law, John Sutton of Kentucky. Barbara also leaves behind several great- nieces and nephews and a host of friends who were like family to her. Visitation will be on Monday from 6:00 - 8:00 p.m. Services will be held for Barbara on Tuesday, December 7, 2021 at 10:00 a.m. at the Powell Funeral Home Chapel with Pastor Jim Ward officiating. Interment will follow in the L.J. Steward Addition of Shady Grove Cemetery. All attendees are encouraged to wear masks. Arrangements are entrusted to Powell Funeral Home, Bald Knob - Judsonia. www.powellfuneralhome.net.

The family of Barbara Lynn Emde created this Life Tributes page to make it easy to share your memories.

Send flowers to the Emde family.