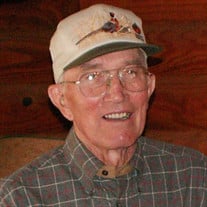 Barksdale Holmes Taylor, 95, of Bald Knob passed away Friday, May 14, 2021, at his home. Bart was born February 25, 1926, in Duck Hill, Mississippi, to the late Maut Adrian and Josie Lee (Herman) Taylor. He is survived by one son, Michael Taylor (Cynthia); daughter-in-law, Connie Taylor; four grandchildren, Bart Taylor III (Jennifer), Jacqueline Taylor Cox (Joseph), Jennifer Taylor Massey (Shawn), and Andrea Taylor Mason (Shawn). He is also survived by eight great-grandchildren, Hudson Taylor, Hazel Taylor, Keeley Cox, Katee Cox, Taylor Massey, Jackson Massey, Aubree Mason, and Parker Mason; two sisters, Alice Collins, of Kansas City, Missouri, and Olivette Stock of Lakeview, Arkansas; and many extended family members and friends. Bart loved the Lord and reading his Bible. His goal was to read through the entire Bible at least once a year. This past year he completed his goal two and a half times. He was a long-time member of Russell Missionary Baptist Church, were he served as deacon. In addition, over the years he served as Sunday School superintendent and as a Sunday School teacher. His wife, Earlene, was the next greatest love of his life. They had been married 72 wonderful years when she was called home. Together they raised two sons, B. H. Jr. and Michael. They raised their boys to value hard work and the Lord. He often said that he really enjoyed working, and that made life better. Bart was a life-long farmer and particularly enjoyed working side by side with his wife and his sons on their family farm near Russell. After he retired from farming his own land, he continued to help his sons. The grandchildren were a wonderful addition to his life. Papa liked nothing more than taking the four of them on an adventure. He was their best play mate. When one of them would say, “Papa will you carry me?”, he would reply, “I’ll carry your hand.” In addition to being active in Russell Missionary Baptist Church, Bart was a Boy Scout leader, a community leader, and he served on the White County FSA Committee. Bart was preceded in death by his parents; his wife, Earlene (Cobble) Taylor; one son, B. H. Taylor Jr.; and nine siblings (six sisters and three brothers). Graveside services will be at Carter Cemetery in Russell, Arkansas, on May 18, at 11:00 a.m. In lieu of flowers, donations may be made to The Gideons or Russell Missionary Baptist Church. Arrangements entrusted to Powell Funeral Home, Bald Knob. www.powellfuneralhome.net.

Barksdale Holmes Taylor, 95, of Bald Knob passed away Friday, May 14, 2021, at his home. Bart was born February 25, 1926, in Duck Hill, Mississippi, to the late Maut Adrian and Josie Lee (Herman) Taylor. He is survived by one son, Michael Taylor... View Obituary & Service Information

The family of Barksdale Holmes Taylor created this Life Tributes page to make it easy to share your memories.

Send flowers to the Taylor family.