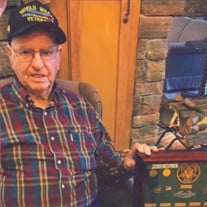 Bernice Edward Morris, 97, of Searcy, Arkansas, passed away peacefully on Sunday, October 10, 2021. Ed was born May 11, 1924 in Judsonia, Arkansas to the late Burnice A. Morris and Rosie (Edwards) Morris. Ed professed his faith in the salvation provided by Jesus prior to his death and looked forward to the prayers held at his bedside each night. Ed entered the United States Army in March 1943 and returned home Christmas of 1945. It was a miracle Ed survived World War II as many of his friends and armed forces buddies were killed in war action. Ed served in Headquarters Company, 1st Battalion, 145th Infantry, 37th Ohio Division. He fought in the Pacific at Luzon, Manila, Guadalcanal, Bougainville, and various other locations in the Pacific. While in the Pacific, part of his tour included him being attached to a Marine Infantry Unit. Ed was wounded while fighting the Japanese on Hill700 on the Island of Empress Augusta Bay, at Bougainville. Ed was sent to the first aid tent and was patched up and told to go back to battle after a short rest. He saw, first hand, men in the aide station that had very serious wounds and some missing arms and legs. Ed was very proud of his service in the United States Army and received many commendations and medals. Upon Ed's return from fighting in the Pacific, he settled in Arkansas, worked for and retired from Natural Gas Pipeline, and was a very avid hunter and fisherman. He enjoyed many days camping with his close family and in-laws. Ed was preceded in death by his wife, Lois (Hays) Morris; sister, Juanita Hodges; sister, Odaline Hays; brother, Leon Morris. He is survived by two sons, Eddy R. Morris (Lyndia) of Conway and Bobby J. Morris (Debbie) of Searcy; grandchildren, Brandi Czernik (Josh) of Conway, Leigh Ann Walker (Carter) of Conway, Ashley Malstrom (Derek) of Ft. Worth, Texas; great-grandchildren, Austin Crawford, Wyatt Crawford, Greyson Green, Stella Walker, Beckham Walker, Macey Malstrom and Cole Malstrom. The family would like to thank all those who were so kind to Ed during his difficult time the past few years. Special thanks to the staff at Providence Assisted Living, Dr. Jim Citty and his nursing staff, Southern Caregivers and their employees and the staff of Hospice Home Care. In lieu of flowers, memorials can be made to Park Avenue Baptist Church of Searcy or to the Salem Missionary Baptist Church of Judsonia. Visitation will be held on Tuesday from 6:00 - 7:30 p.m. at Powell Funeral Home in Searcy. Services will be conducted on Wednesday, October 13, 2021 at 10:00 a.m. at the White County Memorial Gardens. Arrangements are entrusted to Powell Funeral Home of Searcy. www.powellfuneralhome.net.

Bernice Edward Morris, 97, of Searcy, Arkansas, passed away peacefully on Sunday, October 10, 2021. Ed was born May 11, 1924 in Judsonia, Arkansas to the late Burnice A. Morris and Rosie (Edwards) Morris. Ed professed his faith in the salvation... View Obituary & Service Information

The family of Bernice Edward Morris created this Life Tributes page to make it easy to share your memories.

Send flowers to the Morris family.