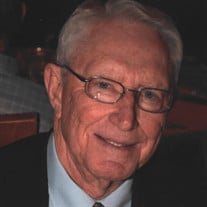 Bob J. Corbin, of Searcy, AR, passed away on December 15, 2021 at his home. He was born Bobby Joe Corbin on July 10, 1933 in Norman, OK, to Elvis and Jewel Corbin. As a young man, Bob excelled in sports, mainly golf, basketball, and baseball... View Obituary & Service Information

The family of Bobby Joe Corbin created this Life Tributes page to make it easy to share your memories.

Send flowers to the Corbin family.