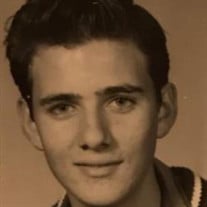 Bobby Ray Davis was born in Wynne, Arkansas on October 16, 1948 to Howard Ray Davis and Lorretta Sisk Davis. He finished his earthly journey on December 12, 2020 after a long battle with cancer. He is survived by his mother, Loretta Sisk Davis of Bradford, Arkansas; his wife of 22 years, Zelma Lenora Davis of the home; two sons, Kip (Camella) Davis of McCrory, AR, Mark Davis of McCrory, AR; five grandchildren, Logan Davis ( Jewel) of McRae, AR, Aaron Davis, Jacob Davis of McCrory, AR, Cortnie and Lily Davis of McCrory; three great grandchildren, Brayli, Eleanor, Eileithyia, of McRae; five sisters, Carolyn Van Beveran of Bradford, AR, Patricia (Buddy) Hall of Galesburg, IL, Rebecca McNew of McCrory, AR, Betty Davis of Bradford, AR, and Lavonne “Tootie” (Tony) Criswell of Heber Springs, AR; two beloved pets, Tippy and Molly; as well as a host of nieces, nephews, aunts, and cousins that adored him. Bobby was first and foremost a dedicated man of God. He loved sharing about Jesus and the Bible. His most prized earthly treasure was his family. He was a talented guitar player, singer and gospel song writer. He loved playing and singing in every church he ever attended. He was a member and deacon at Smith Center Assembly of God, Hickory Ridge, AR. He worked at many trades during his lifetime. He served in the United States Army with a field artillery occupational status. He worked for the United States Postal Service, was a security guard for American Greetings for 23 years and owned and operated D&D Metal Roofing Company until his health led him to retire. He loved spreading the gospel most of all and is now entering into his reward. For I am now ready to be offered, and the time of my departure is at hand. I have fought a good fight, I have finished my course, I have kept the faith: Henceforth there is laid upon me a crown of righteousness, which the Lord, the righteous judge, shall give me at that day: and not to me only, but unto all them also that love his appearing. A celebration of Bobby’s life will be held at Smith Center Assembly of God, 695 CR 147, Hickory Ridge, AR 72347 on Saturday, December 19, 2020 at 11:00 a.m. Arrangements entrusted to Powell Funeral Home of Woodruff County. www.powellfuneralhome.net.

Bobby Ray Davis was born in Wynne, Arkansas on October 16, 1948 to Howard Ray Davis and Lorretta Sisk Davis. He finished his earthly journey on December 12, 2020 after a long battle with cancer. He is survived by his mother, Loretta Sisk Davis... View Obituary & Service Information

The family of Bobby Ray Davis created this Life Tributes page to make it easy to share your memories.

Send flowers to the Davis family.