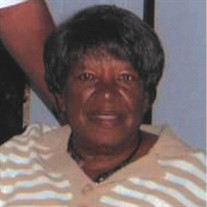 Carrie Lee Newton Brewer was born December 4, 1929 to the late Garfield and Emma Young Newton in Joiner, Arkansas. One of six children, her family later moved to West Point, Arkansas. Carrie accepted Christ at an early age and continued serving her Lord and Savior faithfully through New Horizons International Ministries. She was a true woman of God who strongly believed in the power of prayer. Carrie was truly blessed and a blessing to others as well. Carrie retired from Harding/Aramark after many years of service in the bakery, then she worked for the Wilbur D. Mills Center for several more years. In 2008 she chose to retire completely and enjoy life. She enjoyed cooking, fishing, shopping, eating out, gardening, making flower beds, feeding birds and before her health failed she enjoyed riding the bus to the Lightle Center and participating in Senior Citizen activities. Carrie is the mother of two sons, James "Ace" Brewer and Bobby Brewer who both preceded her in death. Her parents, 5 siblings, Lyncola, Bill, Walter, Jesse, and Lily along with 1 grandson, Orlando "Pete" Brewer who also preceded her in death. On July 21, 2021 God called his loving Angel and faithful servant home leaving to cherish her precious memory 6 grandchildren, James Brewer (Ronda), Paula Brewer (Richard), Kevin Brewer, Andra Brewer, Aretha Winbush and Foster Baker (April). 19 great grandchildren, 20 great great grandchildren, 2 special nephews, Nathaniel Newton and Lindell Bailey and a host of nieces, nephews, family and special friends. A celebration of Carrie's life will be held at Powell Funeral Home in Searcy, Arkansas on Wednesday, July 28, 2021 at 2:00 p.m. Visitation will begin at 12:00 p.m. prior to the service. Interment will be at West Point Cemetery. Arrangements entrusted to Powell Funeral Home, Searcy. www.powellfuneralhome.net.

The family of Carrie Lee Newton Brewer created this Life Tributes page to make it easy to share your memories.

Send flowers to the Brewer family.