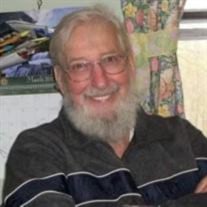 Charles Edward Latina died on December 2, 2021 at home in Pangburn, Arkansas. He was born at home in Carpentersville, Illinois on September 16, 1931. Charles was the son of John and Eva (Loecholt) Latina. Charles served with the U. S. Army during the Korean War. He was a proud veteran and honored all who served. When Charles returned, he married Glorianne M. Hopp of Carpentersville, Illinois. They celebrated 67 years of marriage in June. Charles’ family always came first, and he was proud of all seven of his children. Charles worked in construction. He was an exceptionally talented Carpenter and Mechanic. Charles owned his own service station and worked in construction in Illinois. Upon moving to Arkansas he built log homes and worked for Matthews Inc. until retirement. However, Charles’ proudest accomplishment, besides his family, is the log home he built for his family's residence. Charles was a member of the First Baptist Church of Pangburn and a lifetime member of the American Legion of Heber Springs, Arkansas. He was an endowment member of the National Rifle Association and supported the USO. Among Charles’ many endeavors, he was proud of being a past Boy Scout troop leader and a member of his adult Bible class. In addition to his parents, he was preceded in death by his daughter Terri Jean (Norris) Reaper and his two brothers John and Joseph Latina. Survivors include: his wife of 67 years, Gloria Hopp Latina; six of his seven children, Carol (Ivan) Smith, Kathy Combs, Linda (Michael) Ames, Steven (Jill) Latina, Thomas (Kenda) Latina, Michael (Dorene) Latina; 14 grandchildren; 25 greatgrandchildren; and two great-great-grandchildren; and numerous extended family and many friends. Visitation will be held at the First Baptist Church of Pangburn, Arkansas on December 11, 2021 from 10-11:30 am. A Memorial Service will be held at 11:30 am officiated by Brother Alan Cook. In lieu of flowers the family suggests memorials be sent to the Alzheimer’s Association or to the First Baptist Church of Pangburn, Arkansas. Arrangements entrusted to Powell Funeral Home, Searcy. www.powellfuneralhome.net.

Charles Edward Latina died on December 2, 2021 at home in Pangburn, Arkansas. He was born at home in Carpentersville, Illinois on September 16, 1931. Charles was the son of John and Eva (Loecholt) Latina. Charles served with the U. S. Army... View Obituary & Service Information

The family of Charles Edward Latina created this Life Tributes page to make it easy to share your memories.

Charles Edward Latina died on December 2, 2021 at home in Pangburn,...

Send flowers to the Latina family.