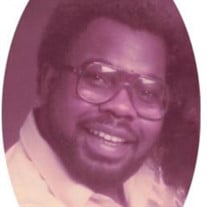 Reflection of Life (Father, Grandfather, Brother, Uncle, Cousin, Friend) Chester Lewis Gant, born 65 years ago in Newport, Arkansas on October 11, 1956. He was the seventh son and last child born of nine to John Eddie and Pauline (Briscoe) Gant, Jr. He departed this life comfortably, on November 22, 2021 at Heather Manor Nursing Facility in Hope, Arkansas. Chester was affectionately known as “Ches” by family and friends. Chester was a man of great ambition and dreams. Some have known him longer than others, some had the privilege of associating with him at his homes and in the community at Augusta, Hope and Pocahontas. Those of us that really knew him can truthfully say that his heart of generous proportion and his loving spirit and character, was far more exceeding than his achievements. He made his life useful and one of great fulfillment and satisfaction. Professing his faith and accepting Christ as his Lord and Master at an early age, he united with the membership of the Lake Grove Missionary Baptist Church. Chester was a graduate of Augusta High School Class of 1975. He furthered his education by attending the University of Arkansas at Pine Bluff, earning a degree in Agriculture (Agronomy). After graduating college, he began employment with the United States Department of Agriculture Farmers Home Administration/Rural Development. He worked in the following cities before landing the position of County Supervisor in Hope Arkansas (Hempstead County), Augusta (Woodruff County) and Walnut Ridge (Lawrence County). Chester was united into marriage to Linda Faye Tidwell on December 23, 1982 and to this union two children were born. Some of Chester’s favorite pastimes were hunting, fishing, and gardening. He liked to travel, listen to the blues music, and attend family reunions and watching the Dallas Cowboys his favorite football team. He owned and operated a small cattle farm/ranch in his early adult years. His health led to an early retirement for both job and cattle ranching. Cherishing his memory and mourning his passing are his survivors; son, Derrick L. Gant (Mary) of Hope, Arkansas; daughter, Tara L. Woodberry; three grandchildren, Ryan Elizabeth, Avery Lane and Jayani Brielle; brother, David Elton Gant of McCrory, Arkansas; two sisters, Brenda Gant and Beverly (Earnest) Wright, Sr. of Augusta, Arkansas; two sisters-in-law, Mattie Gant, Camden, South Carolina and Denise Gant of Seattle, Washington; three aunts, Stella Gant, St. Louis, Missouri, Evelyn (Briscoe) Battle, Gary, Indiana and Ida Briscoe of Augusta, Arkansas and many nieces, nephews, cousins, and friends. Chester was preceded in death by his parents, John Eddie and Pauline; five brothers, John Charles, Paul Edward, James Author, Eddie Lee and Thomas Gene. Chester Lewis is now resting in peace and he will be sorely missed by family and friends. “For God so loved the world that He have His only begotten Son that whoever believes in Him should not perish but have everlasting life.” John 3:16

The family of Chester Lewis Gant created this Life Tributes page to make it easy to share your memories.

Send flowers to the Gant family.