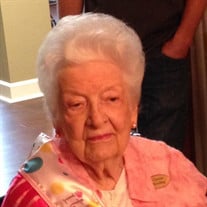 Clarene Louise (Smith) Keesling, a traveler through many states and many countries passed from this life Friday January 15, 2021 at the age of 97. She was born April 23, 1923 to Edna and Benton V. Smith in Las Vegas, Nevada. She was one of five children and has been preceded in death by all but her youngest brother, Earl. Clarene met Darrell while attending Pepperdine College in Los Angeles, California. World War II changed the plans of their lives and marriage soon followed. The first of their children was born while Darrell was in the Navy and the second and subsequent children started coming along shortly after the end of World War II. Darrell farmed and Clarene raised the children and sewed – making clothes, quilts, and pretty things made from cloth, yarn and thread. When the farming no longer supported the family Darrell started working for Game Refuges, Job Corps, and National Parks until retirement in Florida. They spend years traveling from coast to coast and boarder to boarder helping and working at camps, children’s homes, and various retreat centers. Darrell fixed and repaired, Clarene sewed and taught, especially teaching children Bible stories using her knitting, those finger puppets, for teaching props. Following Darrell’s death she moved to Harding Place in Searcy and shortly thereafter was teaching sewing and crafts to the children at Sunshine School. As her physical health continued to decline and the frequent falls took their toll soon the doing of things was replaced by the telling of things done. She was a great story teller until near the end and even then she continued telling the stories of her and Darrell’s adventures but just couldn’t always keep them in the right decade. Throughout the adventures and travels the two constants in her life were her love for Darrell and their love for the Lord. Some of her most enjoyable times near the end of her life were when her caregiver would tuck her in for the night then read the Bible to her, often until she fell asleep – which she now has done for the last time. She was preceded in death by her parents, two brothers and a sister, her husband, three infant sons and one adult son – Tim, the last born of her children. She raised four children, Jean, Bill, Kathy, and Tim, and survived by nine grandchildren, and many great-grandchildren, great-great grandchildren, and the great-great-great-grandchildren have started arriving on the scene. Clarene lived a long life, touched many lives, and has now gone to be with the Lord. Thank you to all who in recent years have helped to make her last years on this earth both comfortable and memorable – you are to be praised. Arrangements entrusted to Powell Funeral Home of Searcy. www.powellfuneralhome.net.

Clarene Louise (Smith) Keesling, a traveler through many states and many countries passed from this life Friday January 15, 2021 at the age of 97. She was born April 23, 1923 to Edna and Benton V. Smith in Las Vegas, Nevada. She was one of... View Obituary & Service Information

The family of Clarene Louise (Smith) Keesling created this Life Tributes page to make it easy to share your memories.

Clarene Louise (Smith) Keesling, a traveler through many states...

Send flowers to the Keesling family.