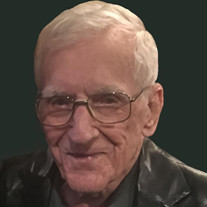 Clelan Eugene Martin, 101, passed away on February 25, 2021, at his home in Searcy. Mr. Martin was preceded in death by his parents, Hubert Munsey Martin and Maud Cranford Martin, his wife Ava Newton Martin, seven brothers, and three sisters. He is survived by his wife Nina F. Martin; daughters Lana Hallmark of Little Rock and Lynette (David) Shipp of Searcy; grandchildren Sarah Shipp of Searcy, Timothy Clelan Shipp of Little Rock, Elizabeth (Kyle) Tiffee of Brighton, CO, Rosemary Hallmark (Aaron Nichols) of Little Rock, Evan Hallmark (Sarah Colpitts) of Tulsa, OK; and great-grandsons Ethan Shipp of Searcy and Jet Tiffee of Brighton. He is also survived by stepdaughter Ginger Feild, step grandson Rusty (Ashley) Feild, and step great-grandson Eli Feild, all of Jonesboro. Mr. Martin was born on December 6, 1919, in Banner, Arkansas, and spent his early life in Cleburne County working in the family’s sawmill. He was the final surviving sibling of eleven children. Their father Hubert Martin was known for his ingenuity and raised sons who could build anything mechanical from scavenged materials. Mr. Martin was a storyteller and loved to talk about escapades with his young brothers. Mr. Martin joined the U.S. Air Force in 1942 and traveled to his first posting at Keesler Air Force Base where he studied airplane mechanics. He later successfully completed pilot training and told many stories about his adventures in the military as well. After his time in the military, Mr. Martin married Ava Arzella Newton in 1948. They had two daughters and moved to Little Rock in 1960 where he was a U.S. mail contractor for 56 years. They were devoted members of Oak Forest United Methodist Church and enjoyed traveling around the world. Ava Martin passed away in 2004 after 55 years of marriage. After his wife’s death, Mr. Martin began attending senior citizen dances, which he enjoyed very much. At one of these dances, he met Nina Faye Bastin and they married in 2006. They built a home on the Little Red River in Searcy and continued to attend dances until he was 99 years old. Mr. Martin passed away in the company of his wife, both of his daughters, and his stepdaughter, as well as a wonderful group of caregivers, most from Arkansas Hospice. The family would like to express their appreciation for the hospice nurses and staff as well as the private caregivers who took such good care of him in his final months. In lieu of flowers, donations can be made to Arkansas Hospice. Due to the most recent COVID-19 directive, attendance is strictly limited to 100 people and face covering must be worn at all times. Arrangements entrusted to Powell Funeral Home of Searcy. www.powellfuneralhome.net.

The family of Clelan Eugene Martin created this Life Tributes page to make it easy to share your memories.

Send flowers to the Martin family.