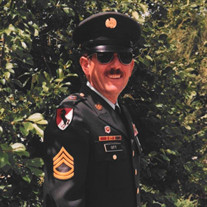 Dale Casper Ott, age 73 of Quitman, Arkansas, formerly of Belfield and McKenzie, North Dakota, passed from this life on Tuesday, November 3, 2020 at his home in Quitman, Arkansas. He was born September 5, 1947 in Dickinson, North Dakota to Casper Ott and Eleanor L. (Reis) Ott. He received his education in grades 1-8 at the Truelson country school and graduated in 1965 from Belfield High School. He attended drafting school in Denver, Colorado. He was a member of Peace Lutheran Church in Edgemont, Arkansas. He joined the US Army in February of 1967 and served in Viet Nam from December 23, 1969 until December 22, 1970 and was Honorably Discharged. After his discharge he returned to Denver and worked for Stearns Rogers Engineering as a computer operator. On October 14, 1972 he married Roxane DeSaverio in Denver. In 1973 they moved back to North Dakota to farm and ranch. He joined the North Dakota Army National Guard in March 1985 until his retirement in February 2007. He started as an Instructor at the Regional Training Institute at Devils Lake, North Dakota. He next worked with IRT in Bismarck, North Dakota. He retired with a total of 28 years of service as a MSG (E-8) and was well decorated to include the Corps of Engineers LaFleur Medal. He always enjoyed visiting with friends at the Little Cottage Cafe in Bismarck. He was an excellent carpenter, mechanic, electrician and plumber. He was very well respected and liked by all. He is survived by his long-time best friend and caregiver, Susan L. “Sue” Johnson of Quitman; two sons, James Ott of Arvada, Colorado, Patrick Ott and wife Jenny of Northglenn, Colorado; Michael’s widow, Desiree Ott; two granddaughters, Ariel Ott of Denver, Colorado, Olivia Ott of Northglenn, Colorado; two brothers, Chuck Ott and wife Doreen of Belfield, North Dakota, Allan Ott and wife Joan of Dickinson, North Dakota; one sister, Loretta Hamilton of Modesto, California; and his best friend, Mark Maxim and wife Regina of Greenbrier, Arkansas. He is preceded in death by his parents, Casper and Eleanor Ott; one son, Michael Ott; one sister, Carol Ott; one brother-in-law, Bob Hamilton; and one nephew, Corey Ott. Visitation will be Thursday, November 5, 2020 at Powell Funeral Home, Searcy from 4:00 until 6:00 pm. Funeral services will be Friday, November 6, 2020 at 1:00 pm at Peace Lutheran Church at Edgemont, Arkansas. There will be a funeral service at BismarckFuneral Home in Bismarck, North Dakota. Interment will be in the North Dakota Veteran's Cemetery in Mandan, North Dakota. Due to the most recent COVID-19 directive, face covering must be worn at all times. Arrangements entrusted to Powell Funeral Home of Searcy. www.powellfuneralhome.net.

The family of Dale Casper Ott created this Life Tributes page to make it easy to share your memories.

Send flowers to the Ott family.