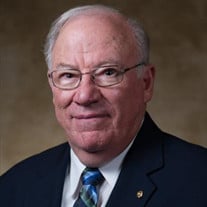 David Curtis Crouch died Monday, January 31, 2022 in Searcy, Arkansas. He was born January 29, 1948 in Rockwood, Tennessee, the oldest son of Marion Johnson Crouch and Samuel Curtis Crouch. He graduated from Oxford (AL) High School in 1966. David then graduated from Harding University in 1970 with a Batchelor of Science degree in biology. During is freshman year he met and fell in love with a true Southern Belle, Lola Ann Murry of Hattiesburg, Mississippi. The couple married on August 2, 1969. While attending Harding, he worked four years on the student newspaper, The Bison, serving as editor his senior year. In 1970, the Arkansas College Press Association named him top editorial writer among the state’s college journalists. In August 1970, just two months after graduating from Harding, he returned to the campus to work as Director of News Services. That was the beginning of a 46 years career with the University. During his career he served in various public relations roles including Director of Placement and Alumni Relations. David directed the school’s Public Relations Office for 29 years before retiring in August, 2016. He served as President of the Southwest Placement Association during the 1986-87 school year. For most of his professional career, David was a member of the Council for the Advancement and Support of Education (CASE). He served CASE District IV in many capacities including 10 years on the orginazation’s board and two terms as treasurer. He also served nationally on the CASE Commission for Marketing and Communications. Locally he was a member of the College Church of Christ for more than 52 years. He also served as a deacon for the congregation and a Bible school teacher. Weekly, he donated his time to work at His House, a benevolent ministry of the College Church of Christ. He was a member of the Searcy Optimist Club, serving as club president, vice president and secretary/treasurer. He was awarded the title of Distinquished President of the Arkansas District of Optimist International and in 2021 was named Optimist Citizen of the Year. He also served on the board of the White County Single Parent Scholarship Fund. David was an avid baseball fan. Some of his fondest memories of living in Searcy were the 17 season he coached in the city’s Little League baseball program. He is survived by his wife of 52 years, Lola Ann (Murry) Crouch; daughter, Tracy Cunningham (Todd) of Smyrna, Tennessee; sons, Eric Crouch (Beth) of Bluff City, Tennessee and Brandon Crouch of San Francisco, California; grandchildren, Jace, Jaden and Jencyn Cunningham and Hailey and Carson Crouch. He was preceded in death by his parents and a brother, Richard Crouch. In lieu of flowers, memorials can be made to The World English Institute, Northwest Division Street, Gresham, Oregon 97030. www.worldenglishinstitute.net Funeral services will be held on Monday, February 7, 2022 at 2:00 p.m. at the College Church of Christ with visitation beginning at 11:00 a.m. Bruce McClarty will officiate. Interment will follow in the Weir Cemetery. Arrangements are entrusted to Powell Funeral Home, Searcy. www.powellfuneralhome.net.

The family of David Curtis Crouch created this Life Tributes page to make it easy to share your memories.

Send flowers to the Crouch family.