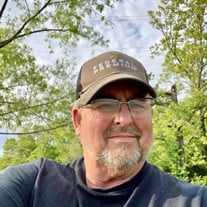 David Phillip “Phil” Starbuck, 60 of Bald Knob, AR died October 10, 2020 in Jackson, OH. Phil was born April 4, 1960 in Millington, TN. He was the son of Jeanette King Starbuck Bridges and the late David Odell Starbuck. Phil was a Journeyman for Local 798 Pipe Fitters Union out of Tulsa, OK. He dedicated a life of service to the Union and the construction industry for over 30 years. When Phil was not working he enjoyed hunting, fishing and spending time with family, especially with his 7 grandkids. He was an avid collector of guns, coins and birdhouses. He loved finding unique treasures from pawn shops and antique stores and he has an exquisite palette for chocolate pie and Hostess Ding Dongs. Phil never met a stranger. Pipelining he made friends from across the country that he talked with until the end. Phil is preceded in death by his father, David Odell Starbuck; maternal grandparents, Ted and Pauline King and paternal grandparents, Odie and Virgie Paul Starbuck. He is survived by his mother, Jeanette King Starbuck Bridges; his sisters, Cathy(Eddie) James, Jimmie Sue (Jeff) Mayes and Jackie (Chris) Montgomery; his children, Brandy Starbuck Stephens, Jeffery Starbuck Mason (Kenna), David (Erin) Starbuck, Summer Diana Starbuck and Cody (Kaitlyn) Starbuck; his grandchildren, Emma, Noah, Kinley, Tatum, Kash, Presley and David Tristan as well as numerous nieces and nephews. A celebration of his life will be held Thursday, October 15, 2020. Visitation will be at Powell Funeral Home in Bald Knob, AR from 12:00-2:00pm followed by a graveside service at Velvet Ridge Cemetery in Velvet Ridge, AR at 2:30 p.m.

The family of David Phillip "Phil" Starbuck created this Life Tributes page to make it easy to share your memories.

Send flowers to the Starbuck family.