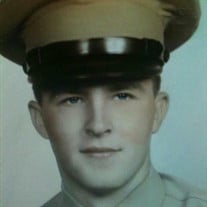 On Monday, December 21, 2020, Donnie Bolding, loving husband and father of three children, passed away at the age of 77. What a glorious evening for the family to stand outside and watch the Christmas Star lead Donnie home. Donnie was born on February 15, 1943 in Judsonia, AR to Claude and Thelma (Poe) Bolding. On August 25, 1962, he married Paula Ann Cato. They raised two sons, Scotty and Jason, and one daughter, Tammy. Donnie joined the Marines in 1961. He served in the Bay of Pigs Cuba, Spain, Vietnam and many other places working as a jet mechanic on the USS Lexington, USS Independence, USS Saratoga, and the USS Shangri-La. Donnie was passionate about his grandchildren and great grandchildren. He enjoyed spending time with them, teaching them to cook, dance to the oldies, and fixing his famous chocolate gravy. He loved being outside and it didn’t matter what he was doing, whether fishing, hunting or manicuring the yard, Donnie loved the outdoors. His dogs brought joy and laughter to his life. Donnie loved the Lord and made it a point of sharing God’s goodness. He had a quote, “Every day is a great day. The Lord has made it perfect. And if it is not a great day, you messed it up.” Donnie was a member of The River Church in Judsonia. He served on leadership, as a life group leader, and served with children ministries for over 40 years. Donnie loved God, his wife, his family, his country…. oh, and ice cream! His life spoke clearly of the love of God, and out of that love the love of people. He was a simple man, but his life knew no stranger. Donnie’s smile lit the room, his hugs demonstrated his love, and his conversation spoke kindness whether you were the Governor or the homeless. Donnie was preceded in death by his father, Claude, and his mother, Thelma. He is survived by his wife, Paula, his three children; Scotty (Taruna) Bolding of Fayetteville, Tammy (Gordon) Toney of Judsonia, and Jason (Becky) Bolding of Judsonia; four brothers, Robert, CJ, Paul and Marshall; nine grandchildren, Krystalyn Spencer, Corey Hawkins, Devin Bolding, Jacob Bolding, Alexis Pinney, Neel Bolding, Megan Bolding, Ryan Bolding, and Jordan Bolding; three great grandchildren, Clara Spencer, Arden Spencer, and Colt Spencer, and one great grandchild on the way, baby Pinney. Funeral services will be held on December 23, 2020, at 10:00 a.m. at The River Church in Judsonia. Visitation will begin prior to services at 9:30 a.m. Due to the COVID-19 mandates the family is asking that everyone wear masks and practice social distancing. Arrangements entrusted to Powell Funeral Home Bald Knob-Judsonia. www.powellfuneralhome.net

On Monday, December 21, 2020, Donnie Bolding, loving husband and father of three children, passed away at the age of 77. What a glorious evening for the family to stand outside and watch the Christmas Star lead Donnie home. Donnie was born... View Obituary & Service Information

The family of Donnie Bolding created this Life Tributes page to make it easy to share your memories.

Send flowers to the Bolding family.