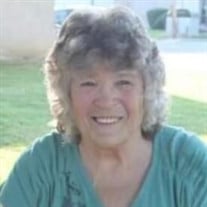 Dorthy Lou Anderson Turpin was born to Sam and Mabel Anderson February 7th, 1945. She went home to be with the Lord February 16th, 2022 in Searcy, Arkansas. Dorthy was a very loving mother and grandmother. She loved the outdoors, fishing, and... View Obituary & Service Information

The family of Dorthy Lou Turpin created this Life Tributes page to make it easy to share your memories.

Send flowers to the Turpin family.