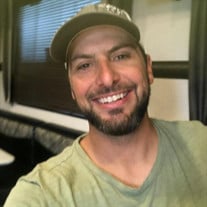 Dustin Jade LeDale Horton, age 33, of Bald Knob, Arkansas, unexpectedly passed away on Sunday, January 3, 2021. Dustin was born on September 8, 1987 to Shelley Sanders and James Nathan Horton in Searcy, Arkansas. He graduated from Bald Knob High School in 2005. He then went on to join the Local 798 Union as a Welder’s Helper. Men that worked with him commented that they could see that he had a passion to serve God and would often lead the morning prayer. His Uncle Tony said “he was always trying to put a smile on people’s faces and make their day better. He was one of the best hearted young men I ever knew.” His son Konlee and his daughter Karis were the two most important people in his life. He often said that his best friend was his sister Taylor. Dustin was a man with a passion to serve God. He was determined to share God’s message with family and friends. Family meant more to him than anything else in the world so it was important to him to share the Word of God with them. Anyone who knew Dustin, knew that he was the most loving father, son and brother a family could ask for. Dustin was predeceased by his paternal grandparents, Gaynell and Jim Horton. He is survived by his children, Konlee and Karis Horton; parents, Shelley and Billy Sanders and James Nathan and Brenda Horton; grandparents, Sue and Eddie Wood; sisters, Taylor Gaskin, Melanie McCarty and Kristen King; brother, Joshua Humes. He was a fun-loving uncle to his nieces and nephews, Ellis and Sawyer Gaskin, Aaron King, Chloe Humes and Aiden Scott. Dustin was a special soul. He had an immense passion for life and was always a positive source in whatever group he was in. Dustin has many aunts, uncles, cousins and friends that will miss him more than words can say. Visitation will be on Friday from 5:00 – 7:00 p.m. Funeral services celebrating Dustin’s life will be conducted on Saturday, January 9, 2021 at 1:00 p.m. at the Powell Funeral Home Chapel. Interment will follow in the Fredonia Cemetery. Arrangements are entrusted to Powell Funeral Home, Bald Knob – Judsonia. www.powellfuneralhome.net.

The family of Dustin Jade LeDale Horton created this Life Tributes page to make it easy to share your memories.

Send flowers to the Horton family.