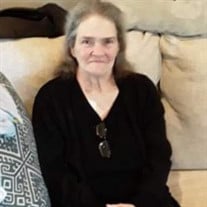 Elizabeth Ann Ragan, 60, of Bald Knob, formerly of Wynne, died Thursday, March 17, 2022. She was born February 21, 1962 in Chicago, Illinois to Thomas Russell and Doris Lue (McGarrity) Sanders. She was a homemaker and a member of the Calvary... View Obituary & Service Information

The family of Elizabeth Ann Ragan created this Life Tributes page to make it easy to share your memories.

Send flowers to the Ragan family.