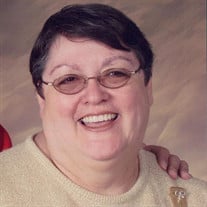 Fanny Marty Perry, 69, passed away unexpectedly on January 30, 2022 with her loving son by her side in North Little Rock, AR. Marty was born December 2, 1952 in McCrory, AR. Her parents are the late Marvin and Velma Perry. Marty grew up a single child in the small town of McCrory, AR where she was a member of McCrory Church of God. She graduated from McCrory High School in 1970. Immediately following high school she began working at Southwestern Bell where she had an amazing 30 year career before retiring. After retiring from SWB, she decided she didn’t want to stay home after all, so she then became one of Searcy ISD’s favorite substitute teachers, and then eventually finished her business career at the Home Depot in Cabot, AR. Her son and grandchildren were the light of her life. When she spoke of her son, Wayne, her eyes lit up and the biggest smile in the world followed. She was so proud of them and all of their accomplishments. There wasn’t a time that she wasn’t there or made sure that her love and support was always with them. Not only did her son and grandchildren feel her love but so did everyone else who ever met her. She was always the light in the room and the life of the party. Her kind and loving spirit will be missed by so many. Marty is survived by her son, Wayne Perry; grandchildren, Daquan Perry, Natalya Perry, Wayne Perry, Jr.; and a host of nieces, nephews and cousins. She is preceded in death by her parents, Marvin and Velma Perry; 1 half-brother, Kenneth Perry; 3 half-sisters, Maunita Wright, Lucille Breckenridge and Geneva Austin and beloved Aunts; Hazel Sharp, Ottie Golden and Muriel Curtis. Funeral services will be conducted on Sunday, February 6, 2022 at 2:00 p.m. at the Powell Funeral Home Chapel in Augusta with Pastor Edward O’Neal officiating. Visitation will begin at 12:00 p.m. Interment will follow in the Pumpkin Bend Cemetery. Arrangements are entrusted to Powell Funeral Home of Woodruff County. www.powellfuneralhome.net.

Fanny Marty Perry, 69, passed away unexpectedly on January 30, 2022 with her loving son by her side in North Little Rock, AR. Marty was born December 2, 1952 in McCrory, AR. Her parents are the late Marvin and Velma Perry. Marty grew up a... View Obituary & Service Information

The family of Fanny Marty Perry created this Life Tributes page to make it easy to share your memories.

Send flowers to the Perry family.