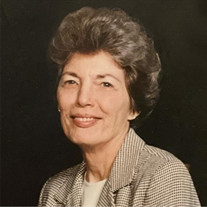 Freda Sue Justus was born April 17, 1933, in Monarch, Arkansas, and transitioned to her eternal home on February 9, 2021. The eighth of ten children, she grew up in the backwoods of Northwest Arkansas. Farm living gave her a deep appreciation for the wonders of God’s creation, and her parents taught her survival skills that ranged from gardening to raising livestock. At age seventeen she married Jack Justus and shared a blessed life with him for sixty-one years before his passing. The Farm Bureau Federation was integral in their lives. While her husband was working with farmers and ranchers on both the state and national levels, she served in community Home Demonstration Clubs and Garden Clubs. Her eyes for artful flower arranging and her practical family living skills were put to good use in those service organizations. After her sons became school age, she pursued her interest in hairdressing and became a licensed cosmetologist. For years she cut hair and gave permanents to residents of a skilled care facility near her home. Preferring to be known by her middle name, Sue, she was a gentle spirit whose talents were often unrecognized. She became a kitchen connoisseur long before cooking was cool. Her grandchildren frequently rose up and called her blessed when she served her signature apple pie. She was a seamstress, skilled at making clothes for herself and her family, and her ability to place perfect rows of tiny stitches produced treasured quilts. She used her sewing talent to make dresses and pants for children in Haiti and crocheted mats for them to sleep on at night. She decided early in life that instructions in Scripture would determine her choices, and her commitment to reading through the Bible each year reinforced her faithfulness to God. At the end of her life, she passed quietly with the words, “It is time for me to go, and God has a plan.” We are convinced that if you were to ask her what offered her greatest pleasure in this life, she would tell you that her heart was constantly with her extended family. Surviving family members include two sons, Michael Justus (Elaine) and Thomas Justus (Leah). Her grandchildren include Andy Justus (Meagan); Ali Hutcherson (Daniel); Anna Ingle (Andrew); Sarah Saunders (Scott); Mary Helen Cox (James) and greatgrandchildren Bonnie and Annabelle Justus; Colbie, Kenzie and Michael Hutcherson; Jack, Maggie, Justus and Henry Ingle; Zachary and Drew Saunders; Emma and Jonah Cox. In lieu of flowers, she would be honored if you choose to send a memorial contribution to Haiti Christian Development Project, PO Box 21119, Little Rock, AR 72221 or to the charity organization of your preference. Arrangements entrusted to Powell Funeral Home, Searcy. www.powellfuneralhome.net.

Freda Sue Justus was born April 17, 1933, in Monarch, Arkansas, and transitioned to her eternal home on February 9, 2021. The eighth of ten children, she grew up in the backwoods of Northwest Arkansas. Farm living gave her a deep appreciation... View Obituary & Service Information

The family of Freda Sue Justus created this Life Tributes page to make it easy to share your memories.