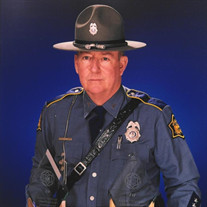 Gary C. Gray, 68, of Judsonia, died Tuesday, August 17, 2021 at home with his family by his side after a 2 year battle with cancer. He was born July 29, 1953 in Searcy to the late Cecil Gray and Martha (Brooks) Gray Donnell. He started his lifelong career in law enforcement with the Judsonia Police Department, having graduated from the training academy in 1974. Later he took a position with the White County Sheriff’s Department on January 1, 1975, where he spent a couple years serving White County, even was named Chief Deputy before becoming commissioned as an Arkansas State Trooper on August 8, 1977. He was first assigned to the Highway Patrol, Troop D, Phillips County before transferring to Woodruff County, where he served the residents in and around the Augusta area for many years. Gary then served in the Crimes Against Children Division in White County before finishing his career with CID Company F in Jonesboro. He was also a trained EMT, sniper on SRT and also a firearms instructor for many years. He was awarded 1st place in the ASPA “Top Gun” Championship in 1998 and 1999. He retired from law enforcement after 34 years & 10 months with the ASP on July 1, 2012. Gary was also an avid outdoors man who enjoyed hunting, fishing and traveling with his family since his retirement. He is survived by his wife of 17 years, Sonja (Howard) Gray; son, Dr. Brian Gray and wife, Andi of Trussville, AL; daughter, Crystal Barnett and husband John of Cabot, AR; granddaughter, Rylee Grayce Barnett; sister, Loretta Wright; brother, Danny Gray and a host of extended family and many friends. He is preceded in death by his parents. In lieu of flowers donations can be made to the American Cancer Society or an animal shelter of your choice in Gary’s memory. There will be a Celebration of Gary’s Life held at a later date and will be announced by Powell Funeral Home Bald Knob-Judsonia. Please check our website for updated service information. www.powellfuneralhome.net

Gary C. Gray, 68, of Judsonia, died Tuesday, August 17, 2021 at home with his family by his side after a 2 year battle with cancer. He was born July 29, 1953 in Searcy to the late Cecil Gray and Martha (Brooks) Gray Donnell. He started his... View Obituary & Service Information

The family of Gary C. Gray created this Life Tributes page to make it easy to share your memories.

Send flowers to the Gray family.