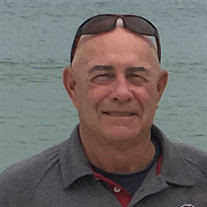 Gary Lynn Tackett, 72, of Searcy, Arkansas, passed away on Tuesday, July 27, 2021, at Unity Hospital. He was born April 30, 1949, in Glenwood, Arkansas to Dillard and Olene Tackett. He attended school in Glenwood, and graduated from Caddo Gap, which he always referred to as "God's Country." He graduated college at Henderson State University and truly loved his Reddies. That is where he met the love of his life, Becky Mathis Tackett. He began his coaching career in Altheimer, Arkansas in 1971 before moving to coach in Searcy, Arkansas in 1976. After coaching he worked at First Security Bank, TCBY, Searcy Industrial Laundry, and retired from the Office of Child Support Enforcement. Gary was still coaching and following "his kids" way beyond after his grandson graduated in 2015. He took the opportunity to attend any sporting event he could find. Everyone knew him as Dad, Papaw, Pap Pap, Jersey, and Coach T. Many of you have even been blessed by a special nickname from Coach. Gary enjoyed playing golf, hunting at Camp 7 with family and friends, where he was called Red Devil. Gary is survived by his wife of 50 years, Rebecca Ann Mathis Tackett, one daughter, Amy Williams (James) of Searcy, one son, Terry Tackett, of Little Rock, his grandchildren, Hunter Wood (Jessica) and Haley Wood, all of Searcy, and Olivia Tackett of Little Rock; he is also survived by his sister, Gail Conaway (Bryan), of Crofton. Maryland , many nieces and nephews, cousins, in laws, one aunt and uncle, and everyone at Camp 7. He was preceded in death by his parents, Dillard and Olene Tackett, several cousins, and his best friend, Danny Davis. Visitation will be held Saturday, July 31, 2021, from 11:00 to 2:00 at Powell Funeral Home in Searcy, Arkansas. A memorial service will be held at 2:00 pm, Sunday, August 1, 2021, at First United Methodist Church in Searcy. Arrangements entrusted to Powell Funeral Home of Searcy. www.powellfuneralhome.net.

Gary Lynn Tackett, 72, of Searcy, Arkansas, passed away on Tuesday, July 27, 2021, at Unity Hospital. He was born April 30, 1949, in Glenwood, Arkansas to Dillard and Olene Tackett. He attended school in Glenwood, and graduated from Caddo... View Obituary & Service Information

The family of Gary Lynn Tackett created this Life Tributes page to make it easy to share your memories.

Gary Lynn Tackett, 72, of Searcy, Arkansas, passed away on Tuesday,...

Send flowers to the Tackett family.