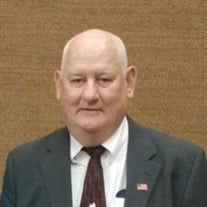 Harry Truman Brown, loving husband, exemplary father, and doting grandfather passed away Saturday, December 26, 2020, due to complications from Covid-19 at age 68. Harry was born March 15, 1952, to Jessie Calvin and Olga Cleta (Lewis) Brown as the youngest of their 7 children in Corona, California. After several moves for his father’s vocation, the family settled in Rose Bud, Arkansas. He attended high school there where he met his high school sweetheart and the love of his life Linda Sherwood. After high school, Harry enlisted in the United States Marine Corp and served his country in the Vietnam War. Before his deployment, he was baptized a member of The Church of Jesus Christ of Latter-day Saints. He and Linda wrote letters daily, and upon his return, they were married in the Mesa Arizona Temple for time and all eternity on February 24, 1973. They began their marriage as he finished up his enlistment in North Carolina where their first daughter Rebecca Danon was born. Upon his honorable discharge from the Marine Corp as a Sergeant, the small family moved home to Arkansas where Harry began his schooling and worked construction for his father-in-law to support his growing family. He graduated from the University of Central Arkansas with a Bachelor of Science Degree and University of Arkansas for Medical Sciences specializing in Respiratory Therapy. During this time they added 2 boys, Nathan Scott and Joshua Wade, to the family and bought their first home in Searcy, Arkansas. After graduating he accepted a job at St. Mary’s Hospital in Russellville, Arkansas as Director of Cardio-Pulmonary. The family moved to Russellville in August 1980 where they added 2 more boys, Daniel Ryan and Andrew Calvin. In 1986 they added another little girl, Sarah Lynn, and he accepted a job with United Blood Services and moved to Greenwood, Arkansas. A few years later, their family was finally complete with the addition of a final boy, Caleb Michael. Harry’s career with the blood bank took them to Tupelo, Mississippi, Denham Springs, Louisiana, back to Greenwood, Arkansas, and finally back to Tupelo until his retirement. Upon retiring from United Blood Services, he worked for Southern Tire Mart in Waco, Texas until his official retirement took him and Linda to their farm in Judsonia, Arkansas where he lived out the remainder of his days. Harry was a man of great faith and a servant in his church. He served as Bishop over several congregations. He served as counselor in the Stake Presidencies in Fort Smith, AR and Tupelo, MS before being called as Stake President and Patriarch in the Tupelo Stake. Harry’s pride and joy was his family. His grandchildren made raising his 7 worth it all. He adored his grandbabies and relished in yodeling “Cattle Call” to get them to nap on his chest. Harry loved music, especially from the 50s and 60s. He loved dancing and would dance with Linda any chance he could get. He loved teaching his daughters and granddaughters to dance, as well. Harry had a unique talent for welcoming everyone and was a robust story teller. He and Linda were unparalleled hosts. They impacted many lives with their hospitality. Harry was preceded in death by his father and mother, and his sisters, Ruth Stark, Joy Jay, Oma Sims, and Patricia Stone. He is survived by his wife, Linda, his older sister Vonda Boynton, older brother Jesse Brown, his seven children Rebecca (Jermaine) Jones, Nathan (Dawn) Brown, Joshua (Amberly) Brown, Daniel (Lacey) Brown, Andrew (Johanna) Brown, Sarah (Eric) Johnson, and Caleb (Jennie) Brown. His survivors also include his 30 grandchildren Jordan Jones, Madison (Wayne) Gasu, Cameron Jones, Jalen Brown, Taryn Brown, Gillian Jones, Deserae Brown, Edyn Brown, Carson Brown, Tallin Brown, Gavin Brown, Peyton Brown, Evan Brown, Brodie Brown, Ryan Brown, Brayden Jones, Londyn Brown, Lauren Brown, Betsy Johnson, Jaxin Brown, Benjamin Brown, Jetson Johnson, Austin Jones, Owen Brown, Sullivan Johnson, Annabelle Brown, Reagan Brown, Brooklyn Brown, Katherine Brown, Roslyn Brown with baby James Brown expected. Funeral Service will be held Saturday, January 2, 2021, at the Church of Jesus Christ of Latter- Day Saints on Skyline Dr in Searcy, AR at 12:00. No viewing will be held as a precaution to Covid. In Lieu of flowers, those who feel inclined can make a donation to Venmo @HarryandLinda-Brown to help support final costs and Linda. Arrangements entrusted to Powell Funeral Home, Searcy. www.powellfuneralhome.net.

The family of Harry Truman Brown created this Life Tributes page to make it easy to share your memories.

Send flowers to the Brown family.