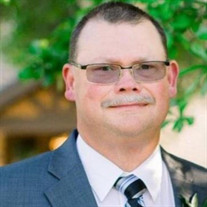 Herman Jerren Kyle, Jr. 55, of Bald Knob, died Tuesday, November 16, 2021 in Searcy. He was born May 6, 1966 in Searcy a son of the late Herman Jerren Kyle, Sr. and Frances Louise Osborn Kyle. Herman was an extremely dedicated Wal-Mart associate with 30 years of service. He loved the Bald Knob Schools and spent many years serving the community in many different capacities. He was instrumental in establishing the Bald Knob Booster Club where he served as Treasurer for many years. He enjoyed 28 years directing the Bald Knob Youth Football Program and he was instrumental in the development of the Bald Knob Bulldog Trap Team. The youth of the community was highly important to Herman and countless young lives were impacted by his dedication and leadership. Herman was an avid sports fan and loved following all Bald Knob Bulldog sports and the Arkansas Razorbacks. He is survived by his wife, of nearly 34 years, Tammie Davis Kyle; his daughter, Chelsea Bruick (Christopher); his granddaughter, who was the light of his life, Charlotte Jean Bruick; mother and father-in-law, Lynn and Verla Davis; sister-in-law, Rhonda Thompson (Kerry); nieces and nephews, Lauren Woods (Casey), Lance Thompson (Audrey) and Ashton Thompson; great-nieces and nephews, Waverly, Sawyer, Adaline and Amelia Woods and Lula Thompson as well as numerous Alumbaugh and Kyle cousins. He was preceded in death by his parents, Herman Jerren Kyle, Sr. and Frances Louise Osborn Kyle and a sister, Elizabeth Ann Kyle. Visitation will be on Friday from 6:00 - 8:00 p.m. Funeral services will be conducted on Saturday, November 20, 2021 at 10:00 a.m. at the Powell Funeral Home Chapel with Bro. Mark Collins officiating. Interment will follow in the Coffeyville Cemetery. In lieu of flowers, memorial contributions can be made to the Bald Knob School District. Arrangements are entrusted to Powell Funeral Home, Bald Knob - Judsonia. www.powellfuneralhome.net.

The family of Herman Jerren Kyle Jr. created this Life Tributes page to make it easy to share your memories.

Send flowers to the Kyle family.