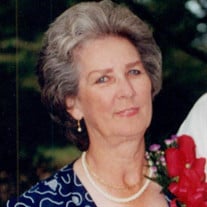 Ima Jean Lindsey was born September 9, 1930 in Augusta, Arkansas the daughter of Ernest Sinclair Coles and Nola Cleo King Ima Jean was preceded in death by her husband, William Hoyle Lindsey; son William Ernest Lindsey; an infant brother, Ernest Sinclair Coles, Jr.; mother, Nola Cleo Coles and her father, Ernest Sinclair Coles. Ima Jean grew up in the small farming town of Gregory, Arkansas when cotton was the king crop. Cotton gins and merchantiles were thriving businesses. Her father came to Gregory from White County and started share cropping with a team of mules. Over time, he acquired several tracts of farm land and settled in Gregory for the rest of his life. Ima Jean got to live through a time where farming went from mules to tractors. She saw first hand, farming become mechanized. Ima Jean met the love of her life at the age of 17, William Hoyle Lindsey, who had just returned from serving in the U.S. Navy during WW II. They met in high school as Hoyle was finishing his education. The two met and on September 17, 1947 were married. After a short stint in California where Hoyle worked at Edward’s Air Force Base, they returned to Gregory and got involved in the farming operation with Ernest Coles. Here she raised her family and resided the rest of her life. She raised her children to work as she always had a big vegetable garden. Ima Jean loved life and always had a smile on her face. She loved her dogs and cats and had many of them through the years. Hoyle and Ima Jean, as everyone knew them, raised their children in Gregory and took over the farm after her father retired, farming the same land and added more acreage as they went. After they retired from farming they both got interested in crappie fishing and enjoyed it immensely, Ima Jean especially. She is survived by 3 children, Vicki Lindsey of Gregory, Johnny H. Lindsey of Wynne and Nola Ann Lindsey of Revel; sister, Linda Magness of Little Rock; grandchildren, Amy McClain, Katherine Cohn, Alexandra Parker, Johnathan Lindsey, Savannah Lindsey, Lance Lindsey and Megan Perretta along with 13 great-grandchildren and numerous nieces and nephews. Visitation will be held Tuesday from 6:00 – 8:00 p.m. Funeral services will be conducted on Wednesday, August 18, 2021 at 4:00 p.m. at the Powell Funeral Home Chapel in Augusta. Interment will follow in the Augusta Memorial Park. Arrangements are entrusted to Powell Funeral Home of Woodruff County. www.powellfuneralhome.net.

The family of Ima Jean (Coles) Lindsey created this Life Tributes page to make it easy to share your memories.

Send flowers to the Lindsey family.