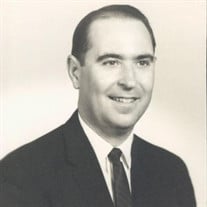 Irvin Shell Blakely passed away February 7, 2021. He was born in Prescott, AR, December 29, 1928, the only child of Sarah Mec Shell Blakely and Percy Maitland Blakely. He is preceded in death by his parents, his beloved wife, Kathleen, and their daughter, Kim Eubanks. He is survived by his daughter, Kathy Lightle and her husband, Steve, his daughter, Ann Blakely and her husband, Rob Katz, his granddaughters, Blakely Howell (Chris), Taylor Wolfe, Randall Lefler (JK), Hannah May (Jeff), Sophie Katz (Mason Rodericks), and Robert Shell Eubanks. He is also survived by his great grandchildren, Maitland Gann, Bax and Payne Howell, Hazel and Ruby Lefler. After graduation at Prescott High School, where he played basketball and softball, he attended Hendrix College. Later, he transferred to the University of Arkansas and obtained a degree in Marketing. Shell and Kathleen were joined in their great marriage in 1950. They lived in Ocean Beach, CA for several years where Shell finished his education through his employment with Bank of America. Following years at Worthen Bank, he joined Kerr-McGee Oil Industries. While working with Kerr-McGee, he met Larry Brewer. They began a long friendship and business partnership that led to the establishment of B&B Oil Company in 1962, and later the formation of BBF Oil Co. with Bill Ferren. In 1978, his son-in-law, Steve Lightle joined the business. This relationship would prove to be one of the most important and treasured of his life. Shell was a past board member of the Arkansas Oil Marketers Association, and an active member of the association throughout his marketing career. He was past-chairman of the United Methodist Church board, and VP of the Searcy Chamber. He served on the State Arthritis Board, several terms on the University of Arkansas Alumni Board, and the Arkansas Children’s Hospital. He also served 30 years on the board of First National Bank of Searcy. Because of his family losses in his young life, he particularly treasured the years with his daughters and Kathleen. Later, he took tremendous pleasure in the times with his grandchildren and great grandchildren. His family, his Methodist Church, his friends, and his community were always his life. He loved fishing, quail hunting, and driving the boat with skiiers! He and Kathleen created a large life and included others in their fun as much as possible. They traveled, danced, hosted parties, and had a true joy for life. In particular, they truly cherished each other and had fun together every day. Shell and Kathleen started as high school sweethearts and now… they are sweethearts in heaven. A Celebration of His Life will be held at a future date. Donations would be welcomed in his honor to First United Methodist Church of Searcy, CARTI, or the Humane Society of Searcy. Arrangements entrusted to Powell Funeral Home, Searcy. www.powellfuneralhome.net.

Irvin Shell Blakely passed away February 7, 2021. He was born in Prescott, AR, December 29, 1928, the only child of Sarah Mec Shell Blakely and Percy Maitland Blakely. He is preceded in death by his parents, his beloved wife, Kathleen, and... View Obituary & Service Information

The family of Irvin Shell Blakely created this Life Tributes page to make it easy to share your memories.

Send flowers to the Blakely family.