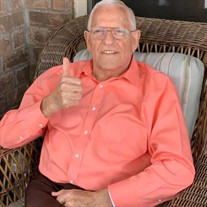 James Alvin McKamey, 86, of Cabot, died Tuesday, March 9, 2021 at Unity Health in Searcy. He was born November 25, 1934 in Bald Knob a son of the late Allen and Dink Lovus (Poe) McKamey. Mr. McKamey retired from the United States Air Force after 20 years of service with the rank of Tech Sgt. While in the military, he received numerous awards and comendations and continually pursued advancement opportunities. After his retirement, he served 17 years with the United States Postal Service and another 7 years in the Cabot School District. James was a long-time member of the McArthur Church in Jacksonville where he served as an usher. He had a love for helping others and was known for his willingness to assist his neighbors and friends. He enjoyed camping trips, “tinkering” and family gatherings. He is survived by his wife of 60 years, Lula Faye “Lou” McKamey; 2 daughters, Rita Stewart (Bruce) of Ward and Dana Gray (Scott) of Cabot; siblings, Harold McKamey, Donald McKamey and Jarhonda Euton (Bob); grandchildren, Tara Stewart, Cortnee Carter (Kenny), Chelsea Grizzelle (Aaron), Dustin Gray and Tyler Gray; great-grandchildren, Stella Grey Carter, Gemma Jaymes Grizzelle, Roman Vance Carter, Elizabeth French Carter and Olivia Yorke Carter. He was preceded in death by a brother, Allen McKamey, Jr. and a sister, Bonnie Ables. Funeral services will be held on Saturday, March 13, 2021 at 11:00 a.m. at the McArthur Church in Jacksonville. Visitation will be held prior to the service, beginning at 10:00 a.m. Interment, with military honors, will follow in the Shady Grove Cemetery in Bald Knob. Arrangements are entrusted to Powell Funeral Home, Bald Knob - Judsonia. www.powellfuneralhome.net.

The family of James Alvin McKamey created this Life Tributes page to make it easy to share your memories.

Send flowers to the McKamey family.