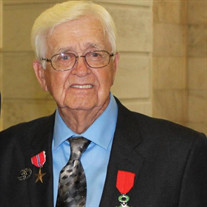 James Mirk “Tinker” Siler, age 96, of Bradford Arkansas passed away on February 04, 2021. He was married to his beloved wife, Marilyn Lee (Lance) Siler for 50 years the year she passed. Tinker at the age of 19 was inducted into the Army on October 16, 1943. He served in the 3rd Army, 5th Infantry Division, 5th Medical Battalion, and Company C. He was a part of General Patton’s 3rd Army. December 16, 1944 – January 25, 1945 he participated, endured and survived in the greatest land battle, The Battle of the Bulge, ever fought and won by the United States Army. He marched through Central Europe during his service. He said many of his fellow soldiers died during this time. He told stories of those soldiers he tried to help during his time in the Army. He spoke of two soldiers who died one in his arms. He said “there isn’t a day that goes by that I don’t see those two soldiers”. Tinker was awarded by the United States, the European-African-Middle-Eastern Campaign Medal with three Bronze Stars and the WWII Victory Medal. After a 70 year delay, he received the Bronze Star and the Combat Medical Badge. April 27, 2015 was proclaimed as James M. Siler Day by the Governor of Arkansas, Asa Hutchinson. Tinker also received the French Legion of Honor on June 27th, 2016 by the French Government. This medal is France’s highest distinction. Tinker was a rural letter carrier for the United States Postal Service in Bradford, Arkansas for 23 years. He was also a city councilman for many years in Bradford. Tinker loved the town of Bradford. James M. “Tinker” Siler 96 passed away on February 04, 2021. He was born on January 08, 1925 to parents, Virgil and Hattie Mae Siler. In addition to his parents, Tinker was preceded in death by his wife, Marilyn Lee (Lance) Siler, sisters, Ludeen (Neil) and Audrey, grandparents, Mirk and LouCinda Siler, John Crawford and Leann France Clark, nieces, Butch and Fonda (Clark) and many more close family members. Tinker is survived by his loving son, Greg Siler (Pamela), daughters, LouCinda Siler Brinkley (Mike), Lisa Hoofman Siler (Danny), grandchildren, Chad and Brooke Johnson, Keegan and Karsyn Siler, Paige Jahoda (John) and Wesley Hoofman (Shonda) , great grandchildren, Alex, Mariah and Ariel. He was a saved child of God!!! Tinkers services will be at Powell Funeral Home in Bald Knob Arkansas on Wednesday, February 10, 2021. Visitation will begin at 11:00 a.m. and funeral services at 12:00 noon. Interment will be at Heard Cemetery in Bradford, Arkansas. Arrangements entrusted to Powell Funeral Home, Bald Knob-Judsonia. www.powellfuneralhome.net.

The family of James Mirk "Tinker" Siler created this Life Tributes page to make it easy to share your memories.

Send flowers to the Siler family.