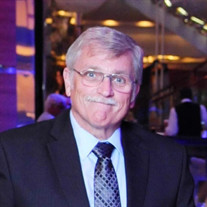 James “Jim” Winford Winner, 67, of Searcy Arkansas, passed away on July 8, 2021, at Unity LTACH in Searcy. Jim was born July 29, 1953 to Bobby Ray Winder and Betsy Denny in Cincinnati, Ohio. He married Jamie Sue Hayes on April 1, 1978 in Springfield, Illinois. After becoming the first Christian in his family, Jim had a calling to minister to others and attended Sunset School of Preaching in Lubbock, Texas from 1981 to 1984, graduating from their Ministerial Program in 1983, then completing graduate work in Doctrine. Jim ministered for over 30 years with the support of Jamie and he was able to fulfill his passion for preaching. Jim served as pulpit minister for several church of Christ congregations in Texas, Illinois, Iowa and Arkansas. He also preached and taught at many other neighboring congregations in the areas he lived. He continued his education in Dixon, Illinois at Sauk Valley Community College, earning an Associate of Science Degree in Psychology, graduating with High Honors in May 1995. In the fall of the same year, Jim earned an Associate of Arts Degree in Criminal Justice, again graduating with High Honors as a member of the Honors Program. Jim earned a Bachelor of Religious Education Degree in 1996, then completed his Master of Religious Education Degree in 1997, both through the Theological University of America. Then in 2010, Jim furthered his Biblical studies in the CAMT program at Harding University in Searcy Arkansas, earning a Bachelor of Ministry Degree. Jim had many different jobs throughout his life, but his true passion was preaching, which he continued to do until he became sick with COVID-19. Aside from his love for studying the Bible, Jim loved fishing, caring for plants and many species of animals, helping others with remodel & construction projects, playing games and watching movies with family, especially Star Wars. The family also enjoyed camping, amusement parks, and spending time with church family. Jim owned an impressive Library and enjoyed collecting lighthouses, pens, mugs and wheat pennies. Jim was proud of raising his kids. He always told his children, “Remember who your Father is.” He did not care what their occupation was, so long as they loved God and lived their lives for him; something he felt certain of in each of them. He was happy to watch each of them marry loving spouses who would help them live faithful lives. Jim also enjoyed spoiling and being entertained by his grandchildren. He always enjoyed hearing of their accomplishments and interests. He was preceded in death by his parents; his brothers Frank Winder and Darin Winder; sisters Tina Winder, Rebecca Winder, and Sandra Sexson; his children Karen Winder and Kerry Winder. He was survived by his wife Jamie Winner; his children Nicholas (Cinda) Carrigan of Rochester, Illinois, Joseph (Erica) Carrigan of Dawson, Illinois, Bobby (Brittney) Winner of Searcy, Arkansas, Sarah (Douglas) Martin of Amarillo, Texas, Caitlin (Alexander) Forcier of Searcy, Arkansas, and Brittny (Matthew) Spampinato of Jonesboro, Arkansas; his grandchildren Lainey Martin, Alyssa Winner, Evangeline Martin, Kenley Martin, Zachary Winner, and Granger Forcier; his siblings Douglas (Dawn) Winder of Monticello, Illinois, Tina Miller-Cooper of Springfield, Illinois, Melody (Donald) Blankenship of Michigan, Melissa Syries of Riverside, California, and Renee Syries of Monticello, Illinois; and many nieces and nephews. Visitation for Jim Winner will be Monday, July 19th, 4-8pm at College Church of Christ in Searcy, Arkansas. Memorial Service will be Tuesday, July 20, 10am at College Church of Christ. The Memorial Service will be live streamed on the College Church of Christ Facebook page. The family has requested everyone wear a mask while attending services. Entrusted with arrangements is Powell Funeral Home of Searcy. www.powellfuneralhome.net. Flowers may be sent to Powell Funeral Home. Memorial donations, in lieu of flowers, can be sent to the Child Safety Center of White County in Searcy, Arkansas at www.childsafetycenter.org or the Brain Recovery Project for childhood epilepsy surgery at www.brainrecoveryproject.org.

The family of James "Jim" Winford Winner created this Life Tributes page to make it easy to share your memories.

Send flowers to the Winner family.