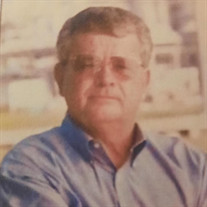 James David "Woody" Woodward, recently of Judsonia, Arkansas, 81, passed away on September 27, 2021. He was born to Emmett O’Dell and Bernice Inez Woodward on December 10, 1939, in Little Rock, Arkansas. David, as he was known to his immediate family, was the oldest of eight children. His friends later nicknamed him “Woody” which was his preferred name throughout his life. Woody graduated from Lonoke High School in 1957. He served his country in the Air National Guard and the Army Reserves, from 1956 to 1963, which included deployment for the desegregation of Central High School in Little Rock in 1957. Following graduation from High School, Woody acquired a position with the Federal Bureau of Investigation in Washington, D.C., under the Director John Edgar Hoover. He would continue his employment with the FBI from 1959-1967, eventually moving to the bureau office in Atlanta, Georgia. While continuing to work for the FBI, Woody attended college and received his B.S. in Chemical Engineering from the Georgia Institute of Technology, Atlanta, Georgia, in 1968. Following graduation, Woody moved his young family - wife Judi Kay Woodward, and daughters Jill and Jana- to Lake Jackson, Texas, to begin his professional career with the Dow Chemical Company in Freeport, Texas. He held various positions with Dow from 1968 until he retired in 1997, as Environmental Consultant. One of his greatest achievements while with Dow was an overseas assignment in partnership with the Korea Pacific Chemical Corporation from 1977-1980. Planning stages took the family to London, England for one year, and to Yeo-Su, South Korea for three years during construction of the chemical plant. In 1980, Woody received a Letter of Commendation from the President of South Korea for the successful construction of the Yeo-Chon Chemical Complex. Woody was an honored member of the Lake Jackson, Texas, Jaycees, serving as President in 1973, and Texas State Senator for the Jaycees in 1976. He also served on the City of Lake Jackson, Texas, Planning Commission for several years. His interests outside of his professional career included photography, woodworking, fishing, traveling in his R.V., and collecting fishing lures. Woody was preceded in death by his parents, his infant grandson, Cormac James Saunderson of Littleton, Colorado, and his second wife, Tanya Lee Woodward of Gainesville, Texas. He is survived by his daughters, Jill Woodward Saunderson of Parker, Colorado, and Jana Kay Reynolds (Jeff) of Lake Jackson, Texas; grandchildren, Cameron James Saunderson and Ashton Bella Saunderson, both of Parker, Colorado; Amy Gwendolyn Reynolds and Erin Elizabeth Reynolds, both of Lake Jackson, Texas; his siblings, Janet Tetkoskie (Dave) of Little Rock, Emma McCrary (Walls) of Lonoke, Gene Woodward (Kay) of Fresco, Texas, Kathy Goss (Ron) of Lonoke, Jerry Woodward of Hot Springs Village, Nancy Browning (Charles), of Judsonia, and Debbie Benson (Chris) of Little Rock. Additionally, he is survived by numerous nieces and nephews, the mother of his children, Judi Kay Woodward of Lake Jackson, Texas, and his third wife Joyce Woodward of Judsonia, Arkansas. Woody moved back to Arkansas in 2019 following the death of his wife in order to be closer to family. He attended the First Baptist Church in Judsonia. Jill and Jana wish to give a special thank you to Nancy and Charles Browning for their unconditional and selfless love they showed their father during his final years. In lieu of flowers, please consider a donation to the American Brain Foundation or a charity of your choice. The family will hold a memorial visitation for local friends of the family on October 16 from 1:00 - 2:00 p.m. in the Fellowship Hall of First Baptist Church in Judsonia. It will be followed by a family graveside service at the Lonoke Cemetery. Arrangements entrusted to Powell Funeral Home Bald Knob-Judsonia. www.powellfuneralhome.net

James David "Woody" Woodward, recently of Judsonia, Arkansas, 81, passed away on September 27, 2021. He was born to Emmett O&#8217;Dell and Bernice Inez Woodward on December 10, 1939, in Little Rock, Arkansas. David, as he was known to his immediate... View Obituary & Service Information

The family of James David "Woody" Woodward created this Life Tributes page to make it easy to share your memories.

Send flowers to the Woodward family.