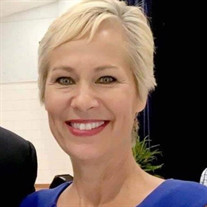 Janet Lee Clark was born to Bob and Frances Clark September 30, 1964 in Searcy, Arkansas at what is now referred to as "the old Rogers' Hospital". She lived in Bald Knob, AR until she left for college at the U of A in Fayetteville, finishing her bachelor's degree in Communications at UALR in Little Rock. Janet was very much a "people person" and her personality won her lifelong friends wherever she went. It was a delight to be in her presence because she would connect to you with her funny wit, pleasant conversation, open, sincere interest in being a friend. Janet's loyalty and love to a large circle of friends from all walks of life created a bond that was seldom broken. Janet's love for animals was second only to her love for her friends and family. She loved dogs and adopted many rescue pups through the years. She loved horses, without fear learned to ride at an early age, later owning and showing Arabian horses. She had a flock of Orrington chickens ( a large, colorful breed) and shared the overflow eggs with neighbors and homeless shelters. Janet loved to travel and so enjoyed the beauty of God's creation in every new place. Janet worked for the Arkansas Department of Information Systems where she served on Governor Hutchinson's accomplished initiative to provide broadband to all public schools in Arkansas. Her co-workers became her friends and she received great support from the people at DIS during her 5 1/2 year battle with ovarian cancer. Janet is survived by her beloved parents Bobby Joe and Frances Clark, her brother Greg Clark (Tammy), her niece Carmen Langston (John Paul) and Grandniece Lilly Johnson, niece Cassie Taylor (Mic) and their children Paeyton and Luke, nephew Hunter West (Kara), Uncle Bruce Worden of Memphis, Aunt Helen D'Angelo of Jacksonville and many, many beloved friends. A celebration of Janet’s life will be held on Friday, June 25, 2021 at 2:30 p.m. at the Powell Funeral Home Chapel. A visitation with the family will begin at 1:30. Arrangements are entrusted to Powell Funeral Home, Bald Knob - Judsonia. www.powellfuneralhome.net.

Janet Lee Clark was born to Bob and Frances Clark September 30, 1964 in Searcy, Arkansas at what is now referred to as "the old Rogers' Hospital". She lived in Bald Knob, AR until she left for college at the U of A in Fayetteville, finishing... View Obituary & Service Information

The family of Janet Lee Clark created this Life Tributes page to make it easy to share your memories.

Send flowers to the Clark family.