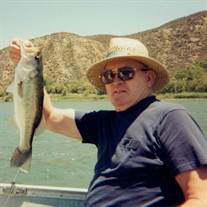 Jimmie Prater, age 91 of Judsonia, Arkansas entered into eternal rest on January 30th 2022 in his home surrounded by his loving family. He was born January 29th 1931 in Isaban, West Virginia to the late Ernest and Edna (Bailey) Prater. He was raised by his late, loving Stepmother, Maudie (Pigg) Prater and his father. Jimmie was a man of many talents. He built his own home for his family in Adrian Michigan at a young age. He built a car and raced in Toledo Ohio and Wisconsin winning many trophies. Some years later, he moved to California for the warmer weather and fishing. Jimmie worked as a mechanic for Pontiac and then Toyota of Riverside until retirement. He then moved to Arkansas in 2002 to be closer to his family. He loved attending Church at The River in Judsonia. An avid outdoor fisherman, craftsman, and lover of stray cats… but his favorite things were to simply spend time with his family and friends, (he never met a stranger). Jim’s hobbies included Nascar, fishing, football, tinkering with motors, and playing practical jokes. He lived life with charity in his heart, always giving, always putting another’s needs before his own. He placed his mark on this world, and this world is a better place because he was here. Jimmie is survived by his wife Juhl (Julie) Harriet Kearns Prater of Arizona; siblings, Ernest Prater of Michigan, and Linda Rudd of Michigan; Children, Patricia (Chico) Rodriguez of Michigan, Jimmie (Thana) Prater of California, Ronica (Roy) Hickey of Arizona, , Jeff Spurlock (CeCe) of California, Jerry Spurlock (Diana) of Montana, Brett Spurlock of California, Tesa Shepherd of California, Barbie (David) Wools of Arkansas; 30 Grandchildren, 48 Great Grandchildren and 16 Great, Great Grandchildren. He was preceded in death by his Parents; two brothers, Parker Prater and Fritz Prater; two sisters, Mildred Mullins and Pauline Addison; one daughter, Carol Sue Prater-Blain; one Son, Kerry David Shepherd and one grandson, Scotty Shepherd. Visitation will be on Saturday from 5:00 - 7:00 p.m. Services will be conducted on Sunday, February 6, 2022 at 2:00 p.m. at the Powell Funeral Home Chapel. Interment will follow in the Providence Cemetery. Arrangements are entrusted to Powell Funeral Home, Bald Knob - Judsonia. www.powellfuneralhome.net. FUNERAL WAS POSTPONED UNTIL SUNDAY DUE TO ICE

Jimmie Prater, age 91 of Judsonia, Arkansas entered into eternal rest on January 30th 2022 in his home surrounded by his loving family. He was born January 29th 1931 in Isaban, West Virginia to the late Ernest and Edna (Bailey) Prater. He was... View Obituary & Service Information

The family of Jimmie Prater created this Life Tributes page to make it easy to share your memories.

Send flowers to the Prater family.