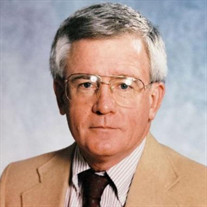 John Dupree Eldridge, III (Jay), age 79 of Augusta, AR passed away peacefully on February 14, 2022, after being lovingly cared for at the Seeds of Love Memory Care Facility in Greenbrier. He was born on September 16, 1942, in Memphis, TN, the third child of John D. Eldridge Jr. and Carra Wood (Woodie) Mixon Eldridge. He graduated from Woodberry Forest School in Virginia and went on to attend Vanderbilt University, graduating in 1965 with a degree in Business. After six years working for the National Bank of Commerce in Memphis, Jay left to attend the University of Arkansas School of Law, following in his father’s footsteps. Jay joined his father at the Eldridge Law Office, in 1974, and maintained the practice for more than 40 years. For the majority of his career he served as either the Woodruff County Deputy Prosecuting Attorney or Woodruff County Municipal Court Judge. He was a member of the local Rotary and Lions Clubs and served as a delegate to the 1979-1980 Arkansas State Constitutional Convention. Jay was the retained attorney for Woodruff Electric and a board member of the Bank of McCrory. Beyond his professional life, Jay had a full social life. An avid duck hunter, he co-owned the Bayou Deview Hunt Club with his father, and later with a group of contemporaries, including Sam Beller, a close friend since Law School. Jay was known for his wit, love of music, and impish sense of humor. Some of his favorite pastimes were reminiscing with his childhood friend Tommy Stanley, aka “T-Baby”, and listening to music with his cousin, George Paul Eldridge (the Cuz). Jay was well known for hosting a daily coffee break, as well as one hell of a Christmas Party, at the Eldridge Law Office. Jay is preceded in death by his mother and father and his beloved great-uncle Robert Lee Mixon (Uncle Brother). He is survived by his wife of 32 years, Gail Eldridge, daughters Ann Miles and Mary Jones (Billy); bonus children Rachael Clinton (Chad), Chad Bone (Lori), Kristan Schroeder, and Erin Richardson (Shawn); grandchildren Emma Crabtree, Will Jones, Thomas Jones, Landry Richardson, Harper Schroeder and Anna Richardson, sisters, Mary Berry (Paul) and Belinda Ruebens, loving nieces and nephews, and many more family and dear friends. Graveside services will be held Tuesday, February 22, 2022 at 2:00 p.m. at the Eldridge Family Cemetery in Gregory, Arkansas. Arrangements are entrusted to Powell Funeral Home, Augusta. www.powellfuneralhome.net. Memorials can be made to the Alzheimer’s Association (https://alzfdn.org).

John Dupree Eldridge, III (Jay), age 79 of Augusta, AR passed away peacefully on February 14, 2022, after being lovingly cared for at the Seeds of Love Memory Care Facility in Greenbrier. He was born on September 16, 1942, in Memphis, TN, the... View Obituary & Service Information

The family of John D. (Jay) Eldridge III created this Life Tributes page to make it easy to share your memories.

Send flowers to the Eldridge family.