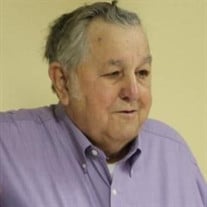 On Tuesday, September 8, 2020, Mr. Johnnie Odell Martin awoke from his sleep into the presence of His Lord and Savior. In a moment, his spiritual and mental body received eternal healing from the lingering physical pains that troubled him in his final days on earth. Born in Bald Knob on January 11, 1937, he was preceded in death by his parents, Johnnie & Esther (Quinn); son, Danny Michael; son-in-law, Bradley Roberts; daughter-in-law, Linda Michael; granddaughter, Kendra Michael; and brother-in-law, Junior Martin. “Odell” enjoyed trips to Branson and working in his garden, but his passion was Bald Knob Schools, where he served as the Director of Transportation for 39 years. A loyal Bulldog, he will be forever remembered for driving “The Pusher” to ballgames, running the chain gain at football games, and supporting the Bulldogs every Friday night for most of his tenure at the school. After spending the past 40 years as a dedicated member of Temple Baptist Church in Bald Knob, he reached his ultimate calling early Tuesday morning, where he received his lifelong reward. Odell is sure to meet those whom he left behind on this side of eternal at the pearly gates, including his wife Arbilee of nearly 40 years; sister, Peggy (Junior) of Bald Knob; and kids: Debbie Roberts (Bradley) of Bald Knob; Mikey Martin of Bald Knob; Kelly Pace (Richard) of Bald Knob; Steve Michael (Linda) of Michigan; Diane Peaton (Buddy) of Bald Knob; and Judy Michael (Danny) of Michigan. His grandkids include Michael Martin (Lisa) of Cabot, Tyrel Pace (Loree) of Bald Knob, Wesley Roberts (Ashlee) of Bald Knob, Tara McKnight (Jason) of Bald Knob, Brent Robert of Bald Knob, Kyle Martin (Veronica) of Conway, Nolan Pace (Ashley) of Hot Springs, Chris Peaton (Ashley) of Bald Knob, Jeff Michael (Jessica) of Michigan, Brian Michael (Jennifer) of Michigan, and Melissa Price of Michigan. Twenty-five great-grandchildren also survive him. Visitation will be at Powell Funeral Home, Bald Knob, on Friday, September 11, 2020, from 6:00-8:00 p.m. A funeral service celebrating his life is scheduled for 2:00 p.m. on Saturday at the Powell Funeral Home Chapel and burial at Shady Grove Cemetery in Bald Knob. Arrangements are entrusted to Powell Funeral Home, Bald Knob - Judsonia. www.powellfuneralhome.net.

On Tuesday, September 8, 2020, Mr. Johnnie Odell Martin awoke from his sleep into the presence of His Lord and Savior. In a moment, his spiritual and mental body received eternal healing from the lingering physical pains that troubled him in... View Obituary & Service Information

The family of Johnnie Odell Martin created this Life Tributes page to make it easy to share your memories.

Send flowers to the Martin family.