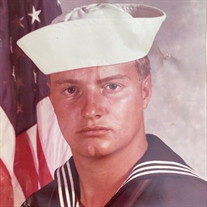 Keith Alan Simmons, 57, of McCrory, passed from this life on Tuesday, September 14, 2021 at his home. He was born September 8, 1964 in Clinton County, Ohio to Christopher “Chris” Simmons, III and Shirley Ann (Jordan) Simmons. Keith was a very patriotic 11 year veteran of the United States Navy. During his military career, he served in Operation Desert Storm and Operation Desert Shield. He was stationed aboard the U.S.S. Kitty Hawk (CV-63), U.S.S. Theodore Roosevelt (CVN-71) and the U.S.S. Constellation (CV-64). Keith was also proud of his designation as an Honorable Shellback which is an honor bestowed on a sailor who has crossed the equator. He loved so many things about life and had various hobbies and interests. He loved crawfish boils, family gatherings, hunting and fishing, mowing his yard, catching bollweaveil and Red Lobster trips with his pal Marvin and flirting…. especially with his nurses at the V.A. that he called his girlfriends. Keith was an avid sports fan and a die hard Razorback supporter and a proud McCrory Jaguar. More than anything, his family was his pride. He loved spending time doing anything at all with his son, especially music and he was proud to be a “Gruncle” to Hattie, his great-niece. Keith possessed a large sense of humor that everyone who knew him will miss greatly. He is survived by his son, Brian Simmons; mother, Shirley Simmons; sister, Lori Cain; brothers, Terry Simmons and Lynn Simmons and wife Ava; nephews, Caleb Simmons and Jordan Cain; nieces, Casey Hawkins and husband Cody and Rae Ann Houston and husband Tyler; great-niece, Hattie Houston; his constant companion, Max as well as several uncles, aunts and cousins and a multitude of friends. He was preceded in death by his father, Chris Simmons, III; brother-in-law, Craig Cain; maternal grandparents, Bud and Rae Jordan; paternal grandparents, Chris and Emma Simmons and the love of his life, Sherry Simmons. Funeral services celebrating Keith’s life will be held on Friday, September 17, 2021 at 3:00 p.m. at the Morton Baptist Church with Pastor Greg Dewitt officiating. Visitation will be held prior to services and will begin at 2:00 p.m. Interment, with military honors, will follow in the Fakes Chapel Cemetery. Arrangements are entrusted to Powell Funeral Home of Woodruff County. www.powellfuneralhome.net.

The family of Keith Alan Simmons created this Life Tributes page to make it easy to share your memories.

Keith Alan Simmons, 57, of McCrory, passed from this life on...

Send flowers to the Simmons family.