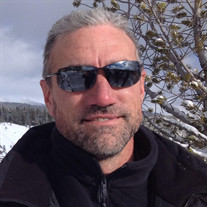 On Wednesday, July 14, 2021, Kenneth (Ken) Bert Wells, loving husband and father of two children, passed away at the age of 53 due to cancer. Ken was born on March 8, 1968 in Newport, AR, to Bert and Dorothy (Cookie) Wells. He joined the U.S. Navy after graduating from high school in 1986, and later retired from the Naval Reserves in 2009. He was employed by ABB, Inc. as a Sr. Field Engineer where he worked at the Evergreen Packaging plant in Canton, NC for the past 25 years. He loved being outdoors and riding his Goldwing motorcycle through the Blue Ridge Mountains and Great Smoky Mountains in North Carolina. He enjoyed drinking his coffee and often was referred to as a “coffee snob”. He adored and loved spending time with his four grandchildren who were the light of his life. He remained best friends with his U.S.S. Saratoga shipmate, Joseph K. Hall (Teresa), forming a friendship that has lasted for over 30 years. He was known for his quick wit, his infectious smile, and his kind and compassionate spirit. Ken was preceded in death by his father, Bert, and his sister, Janie. He is survived by his wife of 30 years, Tracy; his two children, Valeri Herring (Michael) and Dustin Wells (Sarah); his mother, Dorothy (Cookie) Wells; his sister, Nina Goza (Sam); his brother, Roy; four grandchildren, Peyton Herring, Molly Wells, Preston Herring and Ellie Wells; a brother-in-law, Wes Fulghum (Trenna); several cousins, nieces, a nephew, a great niece and of course, his dog “Homie.” A funeral service will be held on Wednesday, July 21, 2021 at Powell Funeral Home in Bald Knob, AR. Visitation will begin at 10:00 a.m. with the service beginning at 11:00 a.m. followed by a graveside service with military honors at Carter Cemetery in Russell, AR. The service will be conducted by Ken’s son, Pastor Dustin Wells. There will also be a memorial service held at the Wells Event Center in Waynesville, NC on Saturday, July 24, 2021 from 2:00-4:00 p.m. In lieu of flowers, the family requests donations be made to the Glioblastoma Foundation in Durham, NC or the American Cancer Society in his memory. Arrangements entrusted to Powell Funeral Home, Bald Knob-Judsonia. www.powellfuneralhome.net.

On Wednesday, July 14, 2021, Kenneth (Ken) Bert Wells, loving husband and father of two children, passed away at the age of 53 due to cancer. Ken was born on March 8, 1968 in Newport, AR, to Bert and Dorothy (Cookie) Wells. He joined the U.S.... View Obituary & Service Information

The family of Kenneth (Ken) Bert Wells created this Life Tributes page to make it easy to share your memories.

Send flowers to the Wells family.