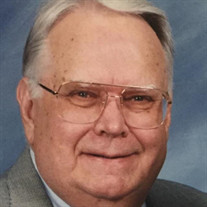 Lynville Lesley Johnson departed this Earth on December 25th, 2020 at Unity Hospital in Searcy, Arkansas. He was born September 14,1935 in Clarksville, Arkansas to Robbie Blackburn Johnson. He grew up and attended grades 1-6 in a one room schoolhouse in Lone Pine, Arkansas. He moved to town in 7th grade and graduated from Clarksville High School. Lynville attended College of the Ozarks (now University of the Ozarks) in Clarksville and graduated with a degree in business. He was employed by Young’s Department Store in Carlisle, Arkansas, where he met and married Margaret Marcotte. The family lived in Carlisle, Heber Springs and Batesville over the next several years. Together, Lynville and Margaret bought and operated Jerry’s Shoe Store in downtown Jonesboro. In 1972, they bought and operated Cotherns’s Department Store in Augusta. They owned and operated the store until their retirement in 2002. Lynville worked part time for the next 14 years for Jimmy Sanders Chemical. He loved his work, family and friends. He was quite the jokester and loved to laugh. He was preceded in death by his wife of 57 years, Margaret, his mother Robbie Balckburn Johsnon, grandparents Homer and Tennie (King) Blackburn, sister Mozelle O’Neal, and nephew Reggie O’Neal. Survivors are daughter, Paulette Shields (Danny) of Augusta; Grandson, Sonny Shields (Monica) of Kotzebue, Alaska; Granddaughter, Lesley Norton (Phillip) of McCrory; Great-Grandsons, Logan Akers and Drew Shields of Jonesboro, Eli Norton of McCrory, and Brick Shields of Kotzebue, Alaska; nieces, Zelinda Baker (Donny) of Spiro, Ok. and Debbie Thompson (Butch) of Van Buren, Ar.; cousins, Donna Przbys (John) and Maureen Atkins (Rick) all of Little Rock and Melinda McNeill (Paul) of Jonesboro. Graveside services will be held on Tuesday, December 29, 2020 at 1:00 p.m. at the Augusta Memorial Park. Arrangements are entrusted to Powell Funeral Home of Woodruff County. www.powellfuneralhome.net.

Lynville Lesley Johnson departed this Earth on December 25th, 2020 at Unity Hospital in Searcy, Arkansas. He was born September 14,1935 in Clarksville, Arkansas to Robbie Blackburn Johnson. He grew up and attended grades 1-6 in a one room schoolhouse... View Obituary & Service Information

The family of Lynville Lesley Johnson created this Life Tributes page to make it easy to share your memories.

Send flowers to the Johnson family.