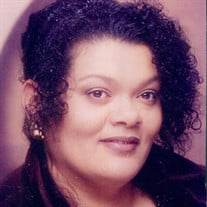 Marilyn Mallet, a beloved wife, mother, sister, aunt, cousin and friend was born to the late Hollis and Bessie Irene McBride, a tradesman and a homemaker in Caruthersville, Missouri on July 24, 1961. Marilyn was the tenth and the youngest child born from this union. She was immersed in the Christian community that would be her lifelong support from an early age. Marilyn graduated from Rocky High School in 1979 and later took courses at community college. Marilyn worked in the service industry for many years and was featured on the front page of the Detroit newspaper for community engagement work. Her work in the service industry was an outpour of pride and love for her family and that love was exceptional! Because Marilyn’s parents died when she was young her older siblings became surrogates. She was loved tremendously by her family in a variety of roles. She was Sister/Daughter; Auntie/Sister; Cousin/Sister and everybody’s best friend. Undoubtedly she loved her family and her love was only extended when she met and married J.C. Mallet. The two were joined in holy matrimony on June 26, 2000. They enjoyed listening to music, playing dominoes and raising their grandson, Branden Benson, Jr. Marilyn was a member of Kensett Church of God where she was baptized on March 24, 2015. She always enjoyed spending time with her family and friends. While Marilyn took joy in singing and making her unforgettable egg rolls, her family loved her most for her laughter and comedic talent. She had a gift! She was able to tell it like it was while making us cry laughing, only to realize that the joke was on us!! Marilyn is survived by her husband J.C. Mallet; son, Branden Benson, Sr., bonus children: Melissa, Crystal and Darris Mallet; sisters: Deloris Mayfield; Gladys Atwater (Percy); Dorothy Byers (Charles) and Mary Gardner; brothers: Michael Earl McBride and Ricky McBride (Pam). Bonus siblings: Tommy Benton and Barbara Jean McBride; grandchildren: Tony Sevier, Branden Benson, Jr., Josiah McBride, London Benson, Krystal Benson and Justin Benson and bonus grandchildren: Jordan Samuels, Christian, Noah, Josiah and Tyleah Mallet and a host of nieces, nephews, relatives and friends. In addition to her parents, she was preceded in death by her daughter, Shalonda Benson, son, Justin McBride; sister, Bobby Jean McBride; brothers, Hollis McBride, Jr. and Preston McBride. A Celebration of Life will be held at 5:30 p.m., Saturday, April 16, 2022 at Powell Funeral Home Chapel in Searcy. The visitation will begin at 4:30 p.m., Saturday, April 16, 2022. Arrangements entrusted to Powell Funeral Home of Searcy. www.powellfuneralhome.net

Marilyn Mallet, a beloved wife, mother, sister, aunt, cousin and friend was born to the late Hollis and Bessie Irene McBride, a tradesman and a homemaker in Caruthersville, Missouri on July 24, 1961. Marilyn was the tenth and the youngest child... View Obituary & Service Information

The family of Marilyn Mallet created this Life Tributes page to make it easy to share your memories.

Send flowers to the Mallet family.