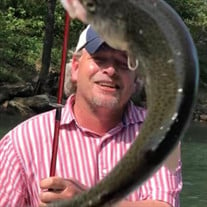 Mark Bradley Dunavin, 42, passed from this life on January 13, 2022, after a hard-fought battle with cancer. He was preceded in death by his paternal grandparents, Hellen and Thea O. Dunavin, uncles Terry Wayne Dunavin, Eric Morris, Terry Jennings and Frankie Ledford, and aunt Elizabeth Davis. Left to cherish his memory are his sons, Trace Dunavin, of Pensacola Beach, Florida and Jaiden Mason, of Velvet Ridge; mother Debbie Dunavin, of Bald Knob; father Gary Dunavin, of Bald Knob; older sister Laura Dunavin Adamson and Mark’s twin brother Michael Dunavin, both of Bald Knob; girlfriend Jolene Bench, who stood by Mark every step of the way, and her daughter Myah Sorrentino, of the home; maternal grandparents Calvin and Mabel Morris of Bald Knob; uncles and aunts Jim Davis, Debbie Jennings, Imogene Dunavin, Fonda and Doug Mason, Darlene and Larry Cantrell, Joann and Jerry Cantrell, and Diane Ledford; stepmother Patricia Johnson of Ward; stepbrothers Chad Autry of Little Rock and Dillon Autry of Austin; and many, many cousins and friends who all loved Mark dearly and were loved by him in return. Mark was born on August 24, 1979, the second born of the twin boys. He attended Bald Knob High School and helped his father in the family’s business. Mark was employed by Union Pacific Railroad, where he worked on the locomotives. Mark was an accomplished mechanic who could fix almost anything with an engine. But Mark was mainly known for his kindness. He was the type of guy who, even as a teenager, would not hesitate to bring home a hungry stray dog he’d found wandering at the local truck stop. He always wanted to help others. He’d stop and help a stranger broken down on the side of the road, taking that stranger to the parts store, purchasing the part, and repairing that person’s vehicle without knowing if he’d be paid back or not. Fortunately, the person Mark helped that day met with him later and did repay him. It didn’t matter to Mark; he only ever wanted to be of help. The people Mark has helped over the years are too numerous to mention here without writing a book. And as kind as he was to animals and people he didn’t know, that paled in comparison to how much he loved and was a help and blessing to his family and friends. He loved his children, his parents, his siblings, and all his family and friends fiercely. Mark opened his home to anyone in need of a place to stay until they could get back on their feet. He never gave up hope on anyone. Mark was a loving and devoted father, son, brother, and friend. This world will be a little less bright without him. Special thanks go out to Robert Rousch of Union Pacific Railroad, and Glenn Curtis, APRN, who helped the family navigate the seemingly endless maze of paperwork connected to Mark’s illness; Denise Johnson, who went above and beyond in organizing fundraisers for Mark; Fonda and Doug Mason, who made numerous trips to MD Anderson Cancer Center and to Florida; and to everyone in our community who donated, spent time with Mark, and all who gave of themselves during this difficult time. Visitation will be held on Monday, January 17, 2022 at 1:00 p.m. at the Powell Funeral Home Chapel in Bald Knob. Services will immediately follow at 2:00 p.m. Pallbearers will be Chad Autry, Dillon Autry, Steven Duke, Ronnie Brown, Anthony Cloyes, and Kevin Ledford. Honorary pallbearers are Colton Cantrell, Mike Gay, Tony Lucius, and Mack Stipes. Interment will follow in the Smith Cemetery near Bradford. Arrangements are entrusted to Powell Funeral Home, Bald Knob - Judsonia. www.powellfuneralhome.net.

The family of Mark Bradley Dunavin created this Life Tributes page to make it easy to share your memories.

Send flowers to the Dunavin family.