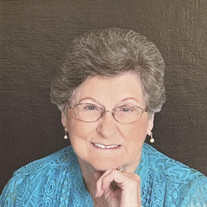 Mary Sue Ballard Adams, age 89, passed away peacefully in her sleep on February 25th 2022. Mary Sue was born on February 9th, 1933, to her mother, Jewel Ballard and her father, Clarence Ballard near Monette, Arkansas. She had a beloved older sister Louise Rogers and a brother Jerry Ballard. Mary Sue’s early life was impacted by the death of her mother from complications of TB when Mary Sue was a young girl. The loss of her mother had a profound impact on both Mary Sue and her sister. They grew up as farmer’s daughters in northeast Arkansas during the depression and WWII and would talk of chopping cotton and hard work on the farm. After the war Mary Sue met a handsome young man in high school who had returned from military service and was finishing school. They fell in love, and she married Cecil J. Adams in June of 1948. They enjoyed just over sixty years of joyful marriage until Cecil’s death in October 2008. Mary Sue and Cecil had three daughters, Kathy Ware, Karla Lowery, and Amy Stafford. Their daughters were born over a span of twenty years and interestingly their births occurred in three separate decades. Mary Sue also was known and loved as Nana by her six grandchildren, Shawn Ware, Shane Ware, Holly Sanchez, Kristi Belt, Kara Lowery, and Leah Cook and by her ten great-grandchildren, Cristi Ware, Hunter Ware, Kaylee Bennett, Maddie Ware, Cooper Ware, Aiden Sanchez, Tanner Sanchez, Carter Belt, Jackson Belt, and Brooklyn Cook. Mary Sue was a dedicated, loving, and determined wife and mother. That determination was tested mightily when Cecil came down with TB in 1960. Rejecting suggestions to send Cecil to a sanitorium, which had been the case for her mother, Mary Sue chose instead to care for him in their home in an isolated room for over a year. Kathy and Karla have memories of visiting with him through the bedroom door and a bedroom window from outside the house during those many months. Mary Sue’s personal commitment to Christ and the Church influenced Cecil greatly and he became Christian in 1973. The two of them were active leaders and served in several churches of Christ throughout their lives. Mary Sue is preceded in death by her parents, her husband and sister. She is survived by her three daughters and their husbands, Terry and Kathy Ware, Kerry and Karla Lowery, and Kenneth and Amy Stafford, her six grandchildren, and ten great-grandchildren. The Family expresses their deepest gratitude to the Staff of Harding Place and all those with Home Instead and also the staff of Elite Hospice who provided loving tender care to “Miss Sue” during the last few months of her life. There will be a visitation on Sunday evening February 27th 2022 between 6pm and 8pm at Powell Funeral Home and a Funeral Service at Powell Funeral Home on Monday February 28th at 1 PM. Arrangements are entrusted to Powell Funeral Home, Searcy. www.powellfuneralhome.net

Mary Sue Ballard Adams, age 89, passed away peacefully in her sleep on February 25th 2022. Mary Sue was born on February 9th, 1933, to her mother, Jewel Ballard and her father, Clarence Ballard near Monette, Arkansas. She had a beloved older... View Obituary & Service Information

The family of Mary Sue Adams created this Life Tributes page to make it easy to share your memories.

Mary Sue Ballard Adams, age 89, passed away peacefully in her...

Send flowers to the Adams family.