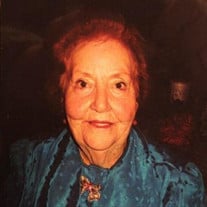 Mary Alice Naoma Pyle Fuller, 87, of Searcy passed away Sunday, February 21, 2021. She was born in Sinco, Arkansas on April 3, 1933 to the late Eva Lou Coleman and Clarence B. Pyle. She is preceded in death by her husband, Lloyd Dean Fuller;... View Obituary & Service Information

The family of Mary Alice Naoma Pyle Fuller created this Life Tributes page to make it easy to share your memories.

Send flowers to the Fuller family.