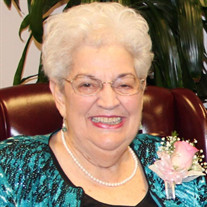 Maydell Yeakley, 85, died peacefully in her sleep March 14, 2021, at Harding Place in Searcy, Arkansas. She was born in Memphis, Texas, on March 10, 1936, the baby of the family, to Irvin Burleson Jeffries and Vesta Ruby Young Jeffries. Maydell grew up in Memphis and graduated from Memphis High School in 1954. She married Flavil Ray Yeakley, Jr. on June 1, 1954 and they were the lights of each other’s lives for 65 years. As a minister’s wife, Maydell found time to serve the church while raising three children. They lived in seven states while the kids were growing up. In 1974, Dr. Yeakley accepted a position at the University of Tulsa and all three children graduated from high school in Tulsa. In 1990, they moved to Searcy, where Dr. Yeakley began teaching at Harding University. They loved Searcy and retired there, moving into Harding Place in 2013. Maydell made many wonderful friends everywhere they lived. She made some especially close friends at Harding Place. She was a people person, a loving extrovert who complimented her husband’s personality. As a minister, Flavil did a lot of counseling, but often claimed Maydell was the better counselor. She was a mentor to many young women through the years, an amazing cook, homemaker, and enjoyed coming up with unique ways of being frugal! She was an accomplished seamstress, making her daughter’s clothes as she grew up, as well as costumes for the boys. She also sewed for her grandchildren, stitching matching dresses for her granddaughters, as well as bridesmaids’ dresses. She made stuffed animals for her grandchildren that her great-grandchildren are playing with now. Maydell cherished volunteering at His House, a benevolence ministry in Searcy. She loved meeting people and sharing her faith with them. Several, including some of her caregivers, became Christians because of her passion. Maydell enjoyed many things, but nothing more than her family. Her husband, Flavil, was her rock and partner. Whatever he did, she supported. They were a team. She loved and delighted in her children, grandchildren and great-grandchildren and was very proud of her family. One of her favorite things was having her children sing together. She insisted on it, even though it usually made her cry. She is survived by her three children: Mark and his wife Kimberlee of Wichita, Kansas, Steven and his wife Shelley of Searcy, and Rebecca Vinzant and her husband Gene of Prairie Grove, Arkansas; eight grandchildren; seven great-grandchildren; and a half brother, Tom Wyatt of Richardson, Texas. She was preceded in death by her husband on August 12, 2019; her parents; her sister, Dorothy Woodard; and five brothers, James, Burl, Bob, David “Buster” and Erwin Leroy Jeffries. Funeral services will be held on Saturday, March 20, 2021 at 1:00 p.m. at College Church of Christ. Visitation will be held prior to the service, beginning at 12:00 p.m. A private interment will follow. Arrangements entrusted to Powell Funeral Home, Searcy. www.powellfuneralhome.net.

Maydell Yeakley, 85, died peacefully in her sleep March 14, 2021, at Harding Place in Searcy, Arkansas. She was born in Memphis, Texas, on March 10, 1936, the baby of the family, to Irvin Burleson Jeffries and Vesta Ruby Young Jeffries. Maydell... View Obituary & Service Information

The family of Maydell Yeakley created this Life Tributes page to make it easy to share your memories.

Send flowers to the Yeakley family.