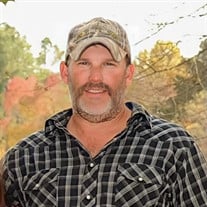 Michael Alan Roberts, 51, of Velvet Ridge, Arkansas was called to his eternal home on Tuesday, August 31, 2021 at his home surrounded by his family. He was born on November 18, 1969 to Edna Verlena (Roberds) Roberts in Searcy, Arkansas. Michael spent his youth on his grandparents, Joe and Susie’s farm in Velvet Ridge. Joe, Susie, and mother, Verlena, led him to be a devoted Christian. He graduated from Harding Academy. Michael was a member of the Velvet Ridge Church of Christ congregation. He was a loving husband, father, papa, son, brother, uncle and friend. He was proud to be a member of the International Union of Operating Engineers Local 450, and worked hard to provide for his family. The majority of Michael’s career was spent in pipelining which he used as an outreach to help others and teach them about God through his daily interactions. He was highly regarded by his coworkers as a hard worker and a good Christian man. He enjoyed taking notes in his Bible, hunting, fishing, and his time at home with his wife and kids. Above anything else, Michael was a faithful Christian, and he made it his mission to raise his family to follow Jesus Christ our Savior. Michael is survived by his wife, Amanda Mason Roberts; sons, Tyler Roberts, Barrett Mason, and Eli Roberts; daughter, Adrian Roberts; grandchildren, Addlynn and Kenzlee Mason; brothers, Richard Roberts (Debbie), Bobby Roberts (Debra); sister, Sandy Wiles (Ben); aunts, Annie Sue Ridgeway and Joann Roberds; as well as a host of nephews, nieces, extended family and friends. He is preceded in death by his grandparents, Joe and Susie Roberds, mother, Edna Verlena Roberts; uncle, Paul Roberts and sister-in-law, Tanja Roberts. Funeral services will be held Saturday, September 4, 2021 at 12:00 p.m. at the Velvet Ridge Church of Christ with visitation beginning at 11:00 a.m. Interment will follow in the Velvet Ridge Cemetery. Arrangements are entrusted to Powell Funeral Home, Bald Knob - Judsonia. www.powellfuneralhome.net.

Michael Alan Roberts, 51, of Velvet Ridge, Arkansas was called to his eternal home on Tuesday, August 31, 2021 at his home surrounded by his family. He was born on November 18, 1969 to Edna Verlena (Roberds) Roberts in Searcy, Arkansas. Michael... View Obituary & Service Information

The family of Michael Alan Roberts created this Life Tributes page to make it easy to share your memories.

Send flowers to the Roberts family.