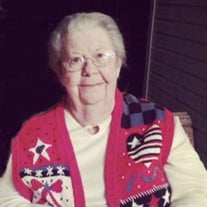 Minnie Lorene Butler was born in Planada, Calif., on June 27, 1932, to Mazel and Floyd Huff. At the age of 21, she met and was courted by a handsome Air Force sergeant by the name of John Butler from Wayne, Mich., and they soon married and began what was to become a lifelong adventure together. There were many challenges in becoming the wife of a career military man and as the family grew, so did the challenges over what was to become the next 22 years with John’s Air Force career. When the family settled down in Judsonia, Ark., in 1969, Lorene was able to spend time raising her children, then her grandchildren and later helping raise her great-grandchildren. She was all about family. Lorene loved helping in the community and helping represent the veterans in the community. It was a great passion of hers. She volunteered and then served for many years with the VFW Post 2330 Ladies Auxiliary. She helped organize and participated in many community projects with her sisters in the auxiliary. One of her favorite projects was ensuring the local schools had new flags every year. She would make it her mission to hand-deliver new flags to the local school superintendents. She hated to see a flag flying in disrepair. This, no doubt, came from being an Air Force wife. She encouraged us to be good citizens and was active helping when her sons were in Scouting. One of her proudest moments was receiving a rose at her two sons' Eagle Awards ceremonies. In 2003, her husband, SM/Sgt John Butler USAF Retired, passed from this earth and she carried on with her role as Grand Dame of the Butler Clan. In recent years, Lorene’s health began to falter and limited her travel from her Plainview home, but it did not deter her from helping whenever she could. In 2019, the loss of her son, Scott, was a setback, since he had become her chauffeur, handyman and family photo archivist. As in all things, we must press on with life. On the night of Sept. 1, 2020, after a great day visiting with her family, Lorene was called home by our Lord and Savior. Lorene was preceded in death by her father, Floyd Huff; mother, Mazel Huff; husband, SM/Sgt John Butler; sisters, Juanita Hunt and Virginia “Boots” Moss; and son, Robert Scott Butler. Lorene is survived by her remaining son, John Butler and wife, Christene; daughters, Margaret Watkins and husband, Guy, Sharon Hale and husband Jimmie; granddaughters, Stephanie Lowery and husband, Mark, Cindy Leonard, Christy Moore and husband, Michael, Sarah Fields and Shiloh Housley, great-grandkids, Evan, Corinne, Dominic, Jaydin Lorene, Jackson, Jase, Jordyn, John Stephen, Madilynne, Mercedes, Moriah, Noah and Savannah. Our family dearly misses our mother, our Gran, our friend and confidant. We are having a public visitation at Powell Funeral Home in Bald Knob on Sunday, Sept. 6, from 2-3 p.m. Graveside service will follow at White County Memorial Gardens at 3:30 p.m. www.powellfuneralhome.net.

Minnie Lorene Butler was born in Planada, Calif., on June 27, 1932, to Mazel and Floyd Huff. At the age of 21, she met and was courted by a handsome Air Force sergeant by the name of John Butler from Wayne, Mich., and they soon married and began... View Obituary & Service Information

The family of Minnie Lorene Butler created this Life Tributes page to make it easy to share your memories.

Minnie Lorene Butler was born in Planada, Calif., on June 27,...

Send flowers to the Butler family.