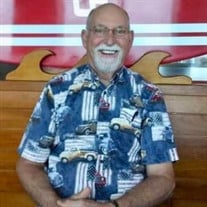 Norman Wayne Cleveland was born February 1, 1945 in Searcy, Arkansas to Luther Cleveland and Bertha Alsadie (Watkins) Cleveland. Norman completed his earthly journey on February 11, 2022 at his home in Judsonia and entered his heavenly home at the age of 77. For the past 27 years, Norman was a proud member of Trinity Baptist Church in Searcy. He served as a deacon and considered the church members as family. Norman was honored to serve in the United States Navy during the Vietnam war. His chosen profession was carpentry and his hobby of wood working became his passion after retirement. He would spend hours making an old piece of furniture become someone’s treasure. He was known for his buying, selling and bargaining skills to make the most of his dollars and to have fun. Norman’s last few projects were building dinning tables for his daughters. Norman had a green thumb when it came to his vegetable and flower gardens. He loved sharing the fruits of his labor with family, friends and the widows from the church. Traveling with his wife, going on cruises, bus trips and camping with the family were some of his most pleasurable activities. Norman’s most prized possession was his wife, Judy, of 52 years. He was quick to brag about the years with his “little woman,” even to strangers. In addition to his wife, he treasured his family and was honored to be called “Daddy” and “Papa.” While trying to raise his two teenage daughters, their friends quickly honored him with the name of “Stormin Norman.” Norman is survived by his wife, Judy Ann (Williams) Cleveland; two daughters, Amanda (Cleveland) Redman of Letona, Amy (Cleveland) Dutton and his son-in-love, Keith Dutton; five grandchildren, Kaleb and Miranda Redman of Letona, Lucas Dutton and wife Molly of Jonesboro, Katelyn (Dutton) Lefford and husband Travis of Searcy and Karleigh Dutton of Searcy; three bonus, foster grandchildren from the Dutton home. In his crown of golden years, two beautiful great-grandsons, Henry Lefford (age 4) and Teddy Dutton (age 6 months). In addition, he will be greatly missed by a multitude of nieces, nephews, cousins and other family and friends. Norman was preceded in death by his parents; 7 older siblings, Elsie Gillam, infant Luther Cleveland, Alvin Cleveland, Evilene Penn, Max Cleveland, Audie Cleveland and Burnice Cleveland; one granddaughter silently born, Mirella Celeste Redman. Funeral services will be conducted on Tuesday, February 15, 2022 at 2:00 p.m. at the Trinity Baptist Church in Searcy with visitation beginning at 1:00 p.m. Paul Sowell, Tim Noel and Jeremy Gillam will officiate. Interment, with military honors, will follow in the Providence Cemetery. Memorials can be made to the Trinity Baptist Church Benevolence Fund. Arrangements are entrusted to Powell Funeral Home, Bald Knob - Judsonia. www.powellfuneralhome.net.

The family of Norman Wayne Cleveland created this Life Tributes page to make it easy to share your memories.

Send flowers to the Cleveland family.