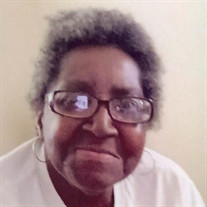 Patricia “Pat” Louise (Young) Mathis, 73, of Kensett, passed away on April 5, 2022 at Oakdale Nursing Home. She was born on March 3, 1949 at University Hospital in Little Rock, AR. Patricia gained the name “Shoe Box Baby” by being delivered at eight months gestation and only weighing four pounds at birth. Her mother passed away at delivery, which led to Patricia being presented to her mother’s sister, Victoria Collier - Hughes. From then on, she was raised by Victoria and Al Hughes, who she referred to as “Mama” and “Daddy.” She was primarily raised in St. Louis, MO. In 1982, she returned to Kensett, AR, to live with her four sons, and in 1999, moved to Minneapolis, MN. In 2017, Pat returned back to Kensett, AR, to live with her daughter, Latasha. Pat was a member of Arnold Tabernacle CME Church in Kensett. She joined under the leadership of Rev. M.L. Hendricks. Patricia leaves to cherish her memory, four sons, David (Sophia) Mathis of St. Paul, MN., Sean (Peggy) Mathis of Champlin, MN., Robert Mathis-Watson (Jennifer Bonds) of California, Anson Mathis-Watson of Kensett; one daughter, Latasha Mathis-Watson - VanPelt of Kensett; daughter-in-law, Janie Mathis of Kileem, Texas; eighteen grandchildren with one on the way; six great grandchildren; one aunt, Almenter Young Davis of Hot Springs; and a host of cousins, friends and family. She is preceded in death by her maternal parents, Walter Young and Verla Collier; adopted parents, Al and Victoria Hughes; one brother, Robert Young; and one sister, Verla Mae Winn. Funeral services will be conducted on Saturday, April 16, 2022, at 11:00 a.m. at the Powell Funeral Home Chapel in Bald Knob. Visitation will precede the service, beginning at 10:00a.m. Interment will follow in Crow Cemetery in Kensett. Arrangements are entrusted to Powell Funeral Home, Bald Knob - Judsonia. www.powellfuneralhome.net

The family of Patricia "Pat" Mathis created this Life Tributes page to make it easy to share your memories.

Send flowers to the Mathis family.