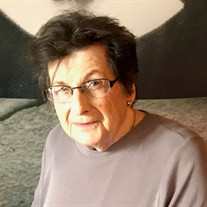 On November 27, 2020, Patricia Lamb Beard McElwee, loving mother, grandmother, great-grandmother, and great-great-grandmother passed away at age 100. She spent most of her youth in Russellville, Arkansas until she moved to Fort Smith, Arkansas, with her family for her senior year of high school. She returned to Russellville, Arkansas to attend Arkansas Polytechnic College where she met John Berry Beard. He received his wings on July 3, 1942, almost a year after enlisting in the Army Air Forces, and they married on July 25, 1942. When he returned from World War II, they lived in Augusta, Arkansas and had three boys, John Berry Beard, Jr. (“Berry”), Robert Lamb Beard, and Samuel Harrison Beard (“Sam”). On July 3, 1957, John Berry died when his crop duster crashed. Pat remained in Augusta, Arkansas working in agricultural clerical work and raising three boys. She met Billy Milze McElwee and they married on January 1, 1964. He helped raise the boys and was her loving and devoted husband until he died on July 3, 2011. Pat loved anything with rules. She was an avid golfer into her 80s, and she was happy to share the rules with anyone playing with or near her that forgot or misunderstood them. She believed in respect for the game and that is what she taught her children and grandchildren. She was a fan of grammar and would helpfully point out the proper use and placement of a pronoun, without regard to others in the vicinity. She knew the rules of all the games she played, whether it was solitaire, Yahtzee, Scrabble, or a crossword puzzle. Even though she owned a dictionary for crossword puzzles, which she worked daily, she would only allow herself to resort to that tool after all her best efforts were exhausted. Her love for the rules enhanced her bridge, as her partners quickly learned to appreciate. She also loved sports, especially those involving the Arkansas Razorbacks and the Dallas Cowboys. She attended the Razorback games in person when she could, and when she could not, they were on the television or the radio. Pat held nothing in higher regard than her family, and to her there were no words synonymous with family. Christmas gatherings were held at her home on Christmas afternoon. There was only one gift opening ceremony with the family, and if you were unable to attend, she would say, “that’s alright honey, you can come by and visit with me sometime after Christmas and open your gift then.” She always had well attended Christmas gatherings that resulted in generations of her family experiencing the same stories and traditions. Family was always welcome in her home, and she always kept the key in the same hiding spot. She was preceded in death by her mother, Jessie Durham Lamb; by her father, Lance Harrison Lamb; six siblings; and her granddaughter Mary Patricia “Trisha” Beard. She is survived by her sons, Berry (Hallie) Beard, Robert (Janice) Beard, Sam (Debbie) Beard; grandchildren, Hallie, Rob, and John; six great-grandchildren; and two great-great-grandchildren. Pat was a proud member of Chapter L, PEO of Augusta, Arkansas. She was a long-time member of the Augusta First United Methodist Church, and only moved her membership to Searcy First United Methodist Church in the last few years, when she relocated to Harding Place in Searcy Arkansas. For the safety of the community, the family is holding a small, private graveside service. The family is especially thankful for the loving care provided to Pat by Sandy Reynolds, Randy Reynolds, Jeff Kellar and the staffs of Harding Place and Home Instead. For memorials a list of organizations dear to Pat’s heart follows: Sparrows Promise, 208 E. Moore, Searcy, Arkansas 72143 (An organization supporting foster children), Methodist Family Health, 1600 Aldersgate Road, Little Rock, Arkansas 72205 Augusta First United Methodist Church, 301 S 3rd, Augusta, AR 72006, Searcy First United Methodist Church, 304 N Main, Searcy, AR 72143 or choose your favorite charity. Arrangements entrusted to Powell Funeral Home of Woodruff County. www.powellfuneralhome.net.

On November 27, 2020, Patricia Lamb Beard McElwee, loving mother, grandmother, great-grandmother, and great-great-grandmother passed away at age 100. She spent most of her youth in Russellville, Arkansas until she moved to Fort Smith,... View Obituary & Service Information

The family of Patricia Lamb Beard McElwee created this Life Tributes page to make it easy to share your memories.

Send flowers to the McElwee family.