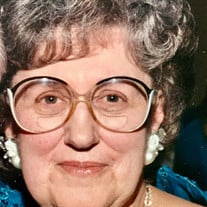 Phyllis Irene Odden of Searcy, Ark., formerly of Fairfield Bay, Ark., and Rugby, ND, passed away quietly in her sleep on Nov. 16, 2021, three weeks short of her 100th birthday. She was born on Dec. 11, 1921, in Rugby, ND to Bertha (Leistikow) and Arthur Ellingson. Her mother died when Phyllis was six months old, so she was raised by her aunt and grandmother. After graduating Dickinson State College in North Dakota, she became a school teacher. Soon after, she met her husband of 53 years, Irwin I. Odden. For many years Phyllis served as bookkeeper for his John Deere dealership in Rugby. The couple moved to Fairfield Bay, Arkansas, in the 1990s. Phyllis lived through everything from a Dust Bowl-Great Depression childhood to beating Covid last year (and a lot in between). She, indeed, was a survivor. Phyllis was quite a vibrant and stylish character. She was the consummate hostess, but always had fun at her own parties. She was an insatiable reader, an accomplished bridge champion and a natural musical talent. She was a big fan of Christmas, and always did it up right. Phyllis was very active in the Lutheran church, both in Rugby and Fairfield Bay. She loved bible study, old-timey hymns and potluck dinners. Phyllis truly was larger-than-life; no one actress has the range to play her in the movie. She was singular and will be very missed and never replaced. She was preceded in death by her husband, Irwin, daughter Karen Ennis, and son Curtis Odden. She leaves a daughter, Leslie Maglitta of Cambridge, Mass.; a son, Dwight Odden of Glendale, Calif.; three grandchildren and several great grandchildren. Private interment was at Woodland Memorial Park Cemetery in Edgemont, Ark. The family would like to thank the staff of Harding Place, The Springs of Searcy and Kindred Hospice for their care. www.powellfuneralhome.net.

The family of Phyllis Irene Odden created this Life Tributes page to make it easy to share your memories.

Send flowers to the Odden family.