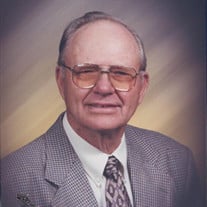 Quentin C. “Bud” Pearce, 96, formerly of Bradford, Arkansas passed away peacefully, Saturday, April 17, 2021 at Wood-Lawn Heights, Batesville, Arkansas. He was born December 5, 1924 at Pleasant Plains, Arkansas to Charles and Loma (Price) Pearce. He was preceded in death by his wife of 72 years, Wanda Faye Pearce just 92 days ago. He died of a broken heart after losing his soul mate of 72 years. He is also preceded in death by his parents, 3 brothers, 2 sisters and 2 grandchildren, Sara Beth Pearce and Andrew (Andy, Pac-Man) Charles Pearce. He is survived by 2 sons and 1 daughter, Charles R. (Randy) Pearce and wife Peggy, Quentin H. (Hank) Pearce and wife Tommie both of Batesville, Arkansas and Susan C. Johnson and husband Raymond (Bo) of Bradford, Arkansas. He is also survived by 1 sister, Alice, four (4) grandchildren, Leslie (Stink) Pearce Gatehouse (Chris), Katie (Tuffy) Pearce, Jacob (Bear) Roberson (Jill) and Jordan (Tadpole) Roberson (Emily), 3 great-grandsons, Jackson and Hudson Roberson (Mutt & Jeff) and Cason Roberson; as well as several nieces and nephews. QC or Bud as he was known served in the US Navy during WWII in the South Pacific and Army Air Corp (later to be the Air Force) during the Korean Conflict. After his service, he attended and graduated Oklahoma State University with a BS in Agriculture. Later he obtained a master’s degree in agriculture from the University of Arkansas and an additional master’s degree in Education from Arkansas State University. He was an Ag teacher and enjoyed teaching his students and competing with his Parliamentary teams. He, also, farmed in the Bradford area many years. He was hardworking and dedicated to providing for his family. He was a member of the Bradford United Methodist Church. He is a member of a brave generation disappearing from this earth. May God rest his soul. In lieu of flowers, memorials may be made to Bradford United Methodist Church, 408 West Walnut Street, Bradford, Arkansas 72020; designate “Food Pantry” in the memo. The family would like to express our gratitude and heartfelt thanks to the staff at Woodcrest Assisted Living and Wood-Lawn Heights for the loving care they provided to our father in his final years and days on this earth. “So do not fear, for I am with you; do not be dismayed, for I am your God. I will strengthen you and help you; I will uphold you with my righteous right hand.” Isaiah 41:10 Visitation will be Wednesday, April 21, 2021 from 1:00 to 2:00 p.m. at the Powell Funeral Home Chapel in Bald Knob; with services to begin at 2:00 p.m. Rev. Bill Mills will be officiating. Interment with military honors will follow in the Heard Cemetery in Bradford. Arrangements entrusted to Powell Funeral Home Bald Knob-Judsonia. www.powellfuneralhome.net

The family of Quentin C. "Bud" Pearce created this Life Tributes page to make it easy to share your memories.

Send flowers to the Pearce family.