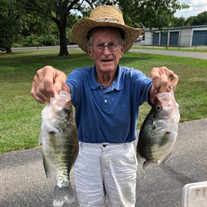 Richard Allison (Coach) "Dick" Johnson, Jr., 95, of Searcy passed away from natural causes, old age and a worn out body on Friday, February 5, 2021 at home, surrounded by his immediate family. Coach was born February 17, 1925 in Nashville, Tennessee to the late Richard A. Johnson, Sr. and Gladys Posey Johnson. Coach Johnson was a member of West Side Church of Christ in Searcy. He was a veteran of WWII, serving in the U.S. Army while stationed in New Guinea and the South West Pacific. A native of Memphis, Tennessee, Coach was outstanding in football, basketball, baseball, track, and a Golden Glove Mid-South boxing champion while attending Whitehaven High School. Coach Johnson graduated from Harding College in 1960 before moving to Georgia, where he coached high school football, girls’ basketball and baseball for nine years. In the spring of 1966 Coach Johnson’s Dykes High School Colts won the AAA Georgia High School State Championship. Coach Johnson was voted the Georgia High School “Coach of the Year”. In 1969, he returned to his alma mater, Harding College where he was a teacher, offensive line coach in football and head baseball coach for 20 years until 1989. After a career 289 wins at Harding, Coach Johnson was rewarded with a flagpole being erected at Jerry Moore Field in his honor and a bronze plaque in the grandstands, presented by Harding University Chancellor Emeritus, Clifton L. Ganus, Jr., on April 6, 2019 which read: Dick Johnson, a native of Memphis, Tennessee, graduated from Harding College in 1960. He returned to his alma mater in 1969 and became Harding’s head baseball coach and assistant football coach. Johnson coached the baseball team until 1989 and compiled 289 wins. In 1984, Coach Johnson was named AIC Coach of the Year and NAIA District 17 Coach of the Year. Under his leadership Bison Baseball accolades include:1984 AIC Champions, 1985 NAIA District 17 Champions and 1986 NAIA District 17 Participants. Coach Johnson served in the United States Army during WWII in New Guinea in the South West Pacific. Because of his service to God and country the flagpole at Jerry Moore Field is dedicated in his honor on this date, April 6, 2019. His records are many; his influence on the lives of young men is immeasurable. PaPa was an avid hunter, fisherman and golfer and enjoyed many hours sharing these experiences with his wife, children, grandchildren and great-grandchildren. He was a loving husband, father, father-in-law, grandfather, great-grandfather, brother, uncle, and friend to many and will be dearly missed. Dick is preceded in death by one daughter, Nancy Johnson Ratliff and one grandson, Brian Luke Johnson; two sisters; and one brother. Left to cherish his memory is his wife of over 73 years, Joyce Springer Johnson, one son, Bill Johnson (Betty); one son-in-law, Gregg Ratliff (Janet) all of Searcy; also grandchildren, Jason Ratliff (Christine) of New York, Brandon Johnson (Kristy) of Beebe, Heather Turner of Tennessee, Mary Lynch of Kentucky; and Brett Ratliff of Missouri. PaPa was blessed with 10 great-grandchildren. A visitation will be held at Powell Funeral Home in Searcy on Monday, February 8, 2021 from 5:00 to 7:00 p.m. A graveside service will be held at White County Memorial Gardens on Tuesday, February 9, 2021 at 2:00 p.m. The family is requesting that mask be worn and social distancing practiced. In lieu of flowers the family request memorials be made to the Ghana West Africa Fund c/o West Side Church of Christ, 702 W. Center Ave., Searcy, AR 72143 or the ALS Association (Lou Gehrig Disease), 1950 Craig Rd., Suite 200, St. Louis, Mo 63416. Arrangements entrusted to Powell Funeral Home, Searcy. www.powellfuneralhome.net.

Richard Allison (Coach) "Dick" Johnson, Jr., 95, of Searcy passed away from natural causes, old age and a worn out body on Friday, February 5, 2021 at home, surrounded by his immediate family. Coach was born February 17, 1925 in Nashville,... View Obituary & Service Information

The family of Richard Allison (Coach) "Dick" Johnson, Jr. created this Life Tributes page to make it easy to share your memories.