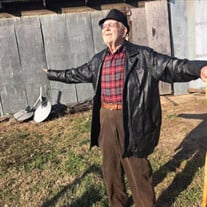 Richard Earl (Junior) Norman, 93 of Judsonia, passed from this life to join his heavenly family on Saturday, November 21, 2020. He was born September 14, 1927 in Little Rock, Arkansas to Walter Earl Norman and Bessie Mae Culver Norman. He was preceded in death by his parents, his wife of 59 years, Juanita (Peggy) Norman, one son Richard Norman, Jr, and Merle Norman from a second marriage. He was also preceded in death by three brothers, Lester, Eugene and Oscar Norman, who died as infants, Six sisters, Katherine McAdams (Louis), Opal Roberson (Raymond), Mary Schroeder (Bob), Helen Kirk (James), Gracie Ross (Neal), Christie Collins (Bill). He is survived by many generations of nieces and nephews who affectionately call him “Uncle Junior”. Richard was a proud World War II veteran, serving in Japan at the end of the war. Following the war, he married Juanita and moved to Kokomo, Indiana. He often spoke about his work with the Coca Cola Bottling Company and then his work as a civilian employee at Grissom Air Force Base. He retired from Grissom AFB and relocated back home in Bald Knob, Arkansas. Those who knew Richard, knew his pride and joy, his son Richard Norman, Jr., who was born with Downs Syndrome. Richard had a special fondness for those who are affected by Downs Syndrome. He loved the outdoors and enjoyed hunting and fishing with family and friends. He enjoyed working and growing a garden each year and sharing all the rewards of the harvest with all he knew. He loved God and wanted to bring all he knew to salvation. He was a long time member of the church of Christ, attending Courtland Avenue in Kokomo and the church in Bald Knob. Graveside services are Wednesday, November 25 at 10:00 a.m. at Fredonia Cemetery in Bald Knob. Visitation will be Tuesday evening, 6:00 to 8:00 at Powell Funeral Home in Bald Knob. Arrangements by Powell Funeral Home of Bald Knob-Judsonia. www.powellfuneralhome.net In lieu of flowers the family requests that donations be made to Downs Syndrome Foundation.

Richard Earl (Junior) Norman, 93 of Judsonia, passed from this life to join his heavenly family on Saturday, November 21, 2020. He was born September 14, 1927 in Little Rock, Arkansas to Walter Earl Norman and Bessie Mae Culver Norman. He... View Obituary & Service Information

The family of Richard Earl Norman created this Life Tributes page to make it easy to share your memories.

Richard Earl (Junior) Norman, 93 of Judsonia, passed from this...

Send flowers to the Norman family.